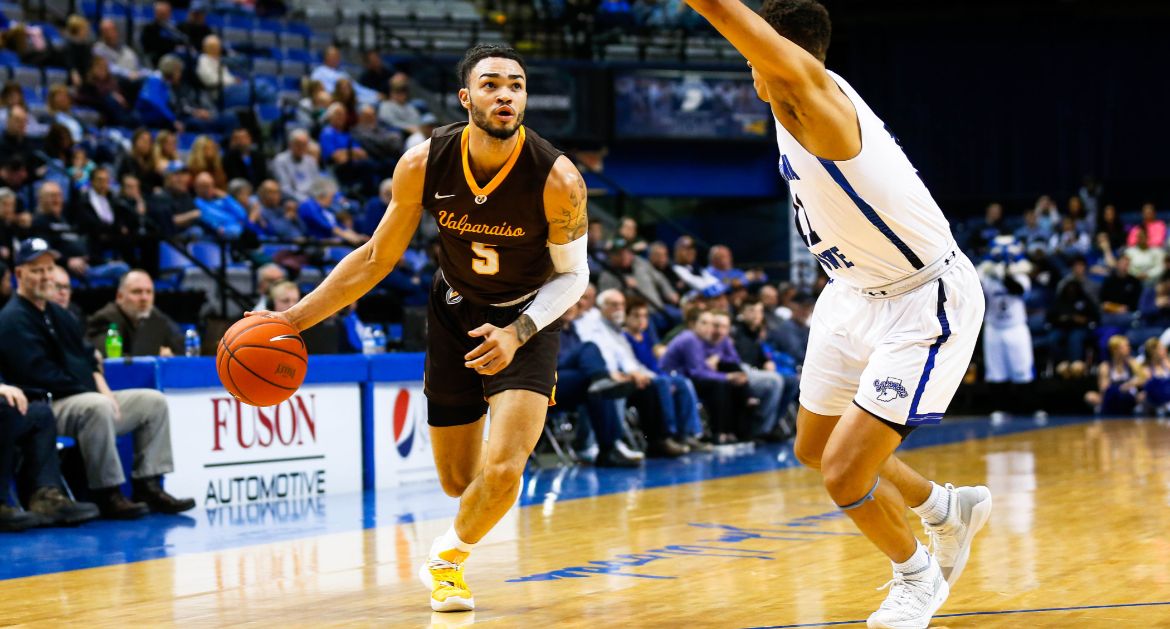 Next Up in Valpo Basketball: The Valparaiso University men’s basketball team returns home to the ARC Saturday night for the first of back-to-back home games, as Valpo hosts Drake at 7 p.m. Valpo enters Saturday night tied atop the Missouri Valley Conference standings, while Drake sits one game back of the Brown and Gold.

Last Time Out: Valpo dropped its second MVC game of the season on Wednesday evening in Terre Haute, Ind., as host Indiana State shot better than 50% from the floor in sending Valpo to a 70-53 defeat. Derrik Smits and Markus Golder tied for team-high honors with 14 points apiece.

Head Coach Matt Lottich: Matt Lottich (51-34) is in his sixth season overall at Valpo and third as head coach in 2018-19. Lottich led Valpo to 15 victories in his second season in charge in 2017-18 and guided the the program through the transition to the MVC, which ended the campaign ranked eighth nationally in conference RPI. In his first year as head coach, Lottich guided Valpo to its fifth Horizon League regular season championship in the last six years as he led the team to 24 wins and an at-large berth into the NIT.

Series Notes: While Valpo and Drake have shared membership in the Pioneer Football League since 1993, they became members of the same all-sports conference for the first time last year when Valpo joined the MVC. The history on the hardwood, while it dates back to 1944, is sparse - the two programs have met just eight times on the basketball court and just once in the last 50 years prior to their two MVC meetings last year. The Crusaders hold a 6-2 advantage in the series, including a 2-0 mark as Valley foes, as Valpo won 77-60 at the ARC and 69-64 in Des Moines last season. In fact, Drake was the only MVC team Valpo swept in its inaugural season in The Valley.

...in the loss at Indiana State
- A pair of free throws from junior Markus Golder 3:34 into the game tied it at 8-8, but ISU’s Tyreke Key nailed a 3-pointer on the Sycamores’ next possession to give Indiana State the lead for good.
- Indiana State outscored Valpo 17-5 over a stretch of 10 minutes in the first half to extend its lead to 13 points, and would eventually lead 32-21 at the half.
- Valpo would get no closer than 10 points in the second half.
- Valpo gave up 70 points to the Sycamores on just 59 possessions, the third-worst defensive efficiency for Valpo this season, only coming in ahead of the West Virginia and Western Kentucky defeats.
- Valpo committed 14 turnovers against the Sycamores’ eight as Indiana State held a 22-6 advantage in points off turnovers. ISU also outscored Valpo in the paint, 40-30.
- Derrik Smits and Golder tied for team-high honors with 14 points apiece, while Deion Lavender added 10 points and a game-high seven rebounds off the bench.

...in the win over UNI
- Valpo never trailed against the Panthers, taking the lead for good on a basket 1:09 in from Derrik Smits as part of a game-opening 16-5 run.
- UNI cut the lead to one 12 minutes into the game, but Valpo pushed back to take a 36-30 lead into halftime.
- Valpo extended its advantage to 10 points with 7:31 to play before a 7-0 UNI run made it a 60-57 lead with four minutes remaining.
- Valpo would score 10 points on its next four possessions, coming from two baskets from Smits and 3-pointers by Bakari Evelyn and Deion Lavender, to extend the advantage to 70-62 with 1:32 to go. UNI would get no closer than six the rest of the way.
- The win over UNI was just the third for Valpo against the Panthers in 27 meetings all-time. It snapped a seven-game winning streak for UNI in the series – Valpo’s last victory versus the Panthers came back in February 1989 at the ARC.
- Leading the way was Smits, who had a size advantage on the interior and took full advantage to the tune of 21 points and 11 rebounds – just two points and one rebound off of his career highs.
- Valpo hit at a 51% (26-of-51) clip from the floor and was 7-of-16 from behind the 3-point line. The Brown and Gold’s offensive efficiency of 121.4 was the best performance against the UNI defense this season.

@DrakeBulldogsMB
- Drake enters Saturday’s game at 15-5 overall and at 4-3 in MVC play, one game out of first place.
- The Bulldogs have won three consecutive games, most recently a 78-66 home win over Evansville on Wednesday.
- Nick McGlynn leads Drake in both scoring and rebounding with 16.2 points and 8.2 rebounds per game, marks which rank third and second in the MVC, respectively.

Bouncing Back
- Valpo will be looking to bounce back from Wednesday night’s loss on Saturday.
- Valpo owns a 6-1 record this season in games following losses - Ball State/Texas A&M are the team’s only back-to-back losses this season.
- Last year’s squad was just 6-10 in games following losses.
- Over a five-year stretch (2012-13 through 2016-17), Valpo had four regular seasons where it did not lose consecutive games.

4-0 Starts
- This year’s squad became just the third Valpo team this century to win at least four straight games to open conference play.
- Despite winning five regular season titles in its last six seasons in the Horizon League, the 2015-16 season was the only time in that stretch Valpo won even its first two league games, starting 6-0 en route to a 16-2 league record.
- The 2002-03 Valpo squad also started 6-0 on its way to a 12-2 record and a Mid-Continent Conference regular season championship.

Leading at the One-Third Mark
- Six games into the 18-game MVC slate, Valpo found itself in a first-place tie with Loyola atop the conference standings at 5-1.
- Each of Valpo’s last four Horizon League regular season championships saw the Crusaders tied or alone atop the conference standings at this point in the league schedule - three times at 5-1 and once at 6-0.
- The last time Valpo was atop its league one-third of the way through the conference schedule and failed to win a title was 2010-11 - Valpo was tied for first place at 5-1 at the one-third mark before finishing in fourth place with a 12-6 record.

Shooting - The Highs and the Lows
- The difference in Valpo’s 3-point shooting in wins versus losses this year is striking - in its 12 victories, Valpo is hitting 40.3% from the 3-point line, while in its eight losses, Valpo is shooting just 24.7% from deep.
- Valpo has hit better than 33% from 3-point range in a loss just once this season and is averaging just 4.9 3-pointers/game in defeats.
- Meanwhile,Valpo has enjoyed a number of strong shooting performances in wins, including a 15-of-27 effort from deep in its win at George Washington and a 12-of-24 performance in the win at Missouri State.
- The 15 triples were the program’s highest total against a Division I opponent since going 15-of-26 from deep in a Feb. 5, 2013 win over UIC.

Centers of Attention
- The combined play of Valpo centers Derrik Smits and Jaume Sorolla has proven crucial to winning since joining The Valley.
- Since joining the MVC, in Valpo’s 11 conference wins, Smits and Sorolla have combined to average 17.7 points and 8.9 rebounds per game.
- Meanwhile, in 14 conference losses, the post duo has averaged just 10.4 points and 5.2 rebounds per game.
- The top six scoring performances from the duo have all come in MVC wins.
- Smits and Sorolla have combined to pull down nine or more rebounds in seven MVC games to date - all of which have been Valpo wins.

Defending Without Fouling
- Perhaps the biggest change defensively for Valpo this season has been its ability to play defense without committing fouls and sending opponents to the foul line.
- Last year’s team ranked 337th nationally (14th from last) in defensive free throw rate, while this year’s squad ranks 74th nationally in the same category.
- In terms of raw numbers, last year’s Valpo opponents averaged 23.2 FT/game across all games and 22.8 FT/game in conference play, while this year, opponents are averaging 16.2 FT/game overall and 15.0 FT/game in conference play.

The Balanced Attack
- On the offensive end, Valpo has proven to have multiple threats who can step up through the season’s first 20 games.
- Entering Saturday’s game, five different players are averaging 9.2 points per game or better, led by Ryan Fazekas’ 12.7 points/game.
- Six different players have led Valpo in scoring in a game this season.
- Valpo last featured five different players averaging in double figures in 2007-08, the program’s first season in the Horizon League.

Buzzer Beaters
- Markus Golder’s buzzer-beater against Illinois State added to the lore of last-second shots in Valpo history.
- It was Valpo’s first game-winner with the clock at zero since Ryan Broekhoff connected on a 3-pointer to give Valpo the 70-69 win in the 2013 Horizon League semifinal at the ARC over Green Bay.
- It was Valpo’s first game-winner from beyond halfcourt since Greg Tonagel drilled a heave from the opposite 3-point line for a 71-68 win over Belmont at the ARC on Jan. 11, 1999.
- Of course, the most famous buzzer-beater in program history came courtesy of Bryce Drew in the first round of the 1998 NCAA Tournament versus Ole Miss.
- Golder’s shot came in at the top spot on SportsCenter’s Top 10 on Wednesday night’s countdown. He became the third different Valpo athlete over three different sports to earn a SportsCenter Top 10 spot since Valpo joined The Valley.

Earning Honors
- Junior Ryan Fazekas became the first Valpo player since the program joined the MVC to earn a weekly award from the conference office, as he was named the MVC Newcomer of the Week on Jan. 2.
- Fazekas earned the honor after leading all players in scoring with 19 points - including five 3-pointers - in Valpo’s win over Purdue Northwest.
- Fazekas repeated as MVC Newcomer of the Week Jan. 7 after pouring in 10 3-pointers over Valpo’s first two MVC wins over Illinois State and Missouri State.