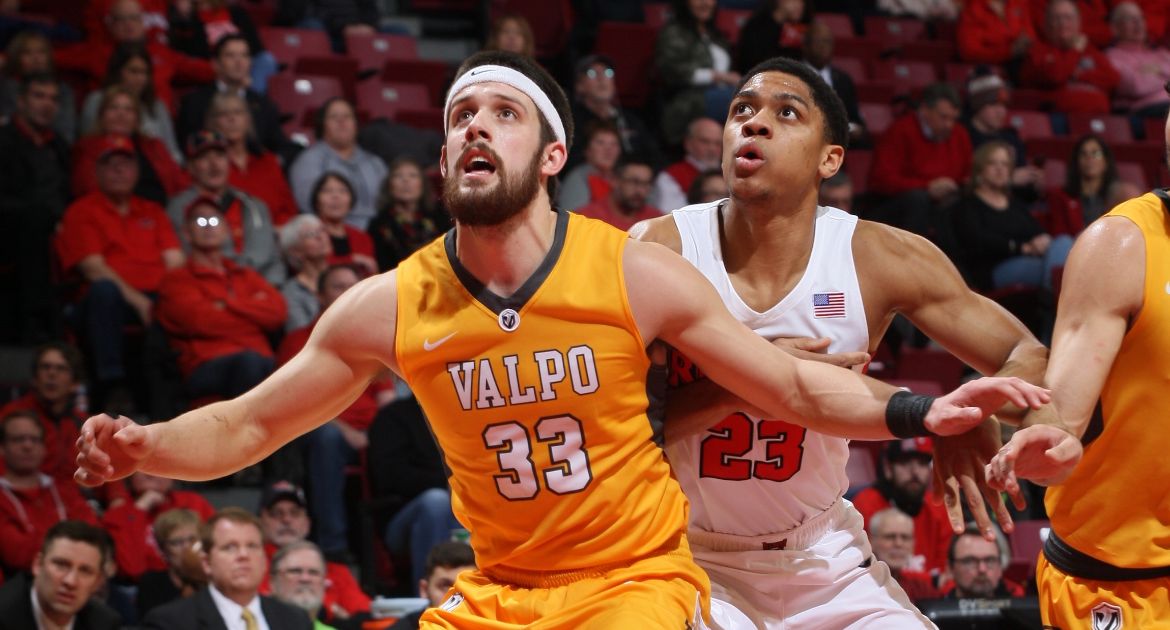 Next Up in Valpo Basketball: The Valparaiso University men’s basketball team welcomes a national TV audience inside the ARC on Sunday afternoon as it hosts Loyola in a key Missouri Valley Conference matchup. Valpo faces the conference-leading Ramblers after taking down then-conference co-leader Illinois State back on Tuesday.

Last Time Out: Valpo raced out to a quick 17-2 lead at Illinois State Tuesday night and held the Redbirds at bay when they made big runs in both halves, eventually leaving Normal, Ill. with a 69-53 victory to snap a four-game losing streak. Freshman Javon Freeman scored a career-best 27 points to lead the way in the winning effort, while Derrik Smits scored all 16 of his points in the second half.

Head Coach Matt Lottich: Matt Lottich (51-38) is in his sixth season overall at Valpo and third as head coach in 2018-19. Lottich led Valpo to 15 victories in his second season in charge in 2017-18 and guided the the program through the transition to the MVC, which ended the campaign ranked eighth nationally in conference RPI. In his first year as head coach, Lottich guided Valpo to its fifth Horizon League regular season championship in the last six years as he led the team to 24 wins and an at-large berth into the NIT.

Series Notes: Loyola holds a 37-15 advantage in the all-time series against the Crusaders – a series which dates way back to 1922. Prior to last season, the two squads had not met since February of 2013, as the Ramblers departed the Horizon League for the Missouri Valley Conference following that season. Loyola has won all three meetings between the two programs since Valpo joined the MVC, including a 71-54 decision in Rogers Park earlier this season.

...in the win at Illinois State
- Valpo scored the first 14 points of the game and led by 15 just 4:30 into the contest.
- Valpo’s largest lead of the first half came at 25-8 with 11:12 to play in the first half before the Redbirds scored the next 13 points to close within four.
- Valpo answered with a 16-3 run to take a 41-24 lead into halftime.
- Valpo outscored Illinois State 10-3 over the first three-plus minutes of the second half, scoring on its first five offensive possessions.
- The Crusaders led 56-33 with 12:38 to play before going scoreless for nearly the next eight minutes, as the Redbirds scored 15 straight points.
- Illinois State was within 58-51 at the under-four media timeout before Valpo ended the game on an 11-2 run.
- With seven games left to play in the conference schedule, Valpo has already matched its conference win total from a season ago.
- Valpo went 10-of-23 from 3-point range, matching the total number of 3-pointers it had made in the previous four games combined.

...in the loss at Evansville
- Valpo led 11-3 eight minutes into the game and surrendered just eight points to the Purple Aces over the first 13 minutes.
- Evansville went on a 16-8 run over a six-minute stretch late in the first half to tie the game at 24-24 before a 3-pointer right before the buzzer by Javon Freeman gave Valpo a 27-24 halftime lead.
- A 15-3 run for the Purple Aces gave them a 39-34 lead with under 12 minutes to play, but Valpo responded with eight straight to make it 42-39 Valpo with 9:39 to play.
- After the teams traded baskets, Evansville went on an 11-0 run over a three-minute span to take control.
-The loss was just Valpo’s second of the year when leading at halftime (8-2).
- Valpo has dropped 22 straight road games at Evansville dating back to 1969.
- Both Valpo and Evansville shot at the exact same 21-of-49 clip from the field, but the Crusaders were just 2-of-10 from the 3-point line and 9-of-17 from the foul line, compared to 7-of-20 and 15-of-21 marks, respectively, by the Purple Aces.

...looking ahead
- Valpo remains at home to host Indiana State at the ARC on Wednesday, Feb. 13.
- A trip to Drake then awaits Valpo on Saturday, Feb. 16.

@RamblersMBB
- Loyola enters Sunday’s game at 15-9 overall and 8-3 in MVC play this year, one game up on Illinois State for first place in the conference standings.
- The Ramblers have won three of their last four, including an 86-64 win last time out against Drake, but have dropped their last two road games.
- Marques Townes leads Loyola, averaging 15.3 ppg, while Cameron Krutwig averages 14.5 points and 7.4 rebounds per game on 65.3% shooting from the field.

The Conference Race
- Through 11 of 18 games of the MVC schedule, the standings are as jumbled as ever, and Valpo finds itself right in the heart of the jumble.
- Valpo currently sits at 6-5, in a three-way tie for third place. The Crusaders are just one game out of second and two games out of first.
- But on the flip side, Valpo is also just one game out of seventh and two games out of last place.

Big Halves
- Valpo got great 20-minute performances from both Javon Freeman and Derrik Smits last time out in the win at Illinois State.
- Freeman dropped 20 points on 8-of-10 shooting in the first half and also grabbed five rebounds, while Smits went 8-of-9 from the field for 16 points in the second half.
- Freeman’s 20-point half was the highest-scoring half by a Valpo player since Tevonn Walker had 22 second-half points vs. Missouri State in last season’s MVC Tournament.
- Freeman is the first Valpo player with a 20-point first half since Alec Peters scored 23 in the opening 20 minutes against Indiana State in December of 2016.
- Peters was also the last Valpo freshman to score 20 in a half, scoring 20 in the second half at Evansville in November of 2013.

Freshman Feats
- The 20-point half was just the latest feat in a strong rookie campaign for Freeman.
- Freeman currently leads the MVC in steals - he would become the first Valpo freshman to lead a conference in a major stat category since at least 1982, while only three MVC freshmen have led the conference in a category in the last 40 years.
- Freeman grabbed 15 rebounds in Valpo’s home game against Missouri State, becoming the shortest Valpo player in at least 30 years with a 15-board effort.
- Freeman opened his career with five straight double-figure scoring efforts, the only Valpo freshman to do so in the last 30 years - only two others had even scored in double figures in three straight to open their careers.
- Freeman scored 22 in his debut, the highest-scoring debut by a freshman since Lubos Barton scored 27 in 1998.
- Meanwhile, fellow freshman Daniel Sackey - who dished out six assists for the third time this season last time out - had scored in double figures in three straight games prior to the Illinois State game.
- Freeman and Sackey are the first pair of Valpo freshmen to both own at least three straight games in double figures during their rookie season since 2013-14.

Rounding Back to Health
- Valpo is down to just one regular out due to injury, after playing one game without the services of its three leading scorers.
- Leading scorer Ryan Fazekas exited the Jan. 8 game against Bradley due to an ankle injury and has not played since.
- Second-leading scorer Derrik Smits missed the Jan. 26 game against Drake due to a back injury.
- Third-leading scorer Markus Golder exited early in that same Drake game, leaving Valpo without its three leading scorers and with just seven scholarship players for the duration of that game.
- Going back 30 years, there hasn’t been a single instance of Valpo’s two leading scorers at the end of the year both missing the same game within that season.
- Smits returned to action Jan. 29 against Missouri State, while Golder suited up again Feb. 2 at Evansville.
- Valpo has just three players - Deion Lavender, Javon Freeman and Daniel Sackey - who have played in all 24 games this season.

Shooting - The Highs and the Lows
- The difference in Valpo’s 3-point shooting in wins versus losses this year is striking - in its 13 victories, Valpo is hitting 40.5% from the 3-point line, while in its 10 losses, Valpo is shooting just 24.0% from deep.
- Valpo has hit better than 33% from 3-point range in a loss just once this season and is averaging just 4.3 3-pointers/game in defeats.
- Prior to the win last time out at Illinois State, Valpo had made just 10 3-pointers combined over the course of its four-game losing streak.
- Meanwhile,Valpo has enjoyed a number of strong shooting performances in wins, including a 15-of-27 effort from deep in its win at George Washington, a 12-of-24 performance in the win at Missouri State, and most recently a 10-of-23 mark in the win at Illinois State.
- The 15 triples at GW were the program’s highest total against a Division I opponent since going 15-of-26 from deep in a Feb. 5, 2013 win over UIC.

Centers of Attention
- The combined play of Valpo centers Derrik Smits and Jaume Sorolla has proven crucial to winning since joining The Valley.
- Since joining the MVC, in Valpo’s 12 conference wins, Smits and Sorolla have combined to average 17.6 points and 8.8 rebounds per game.
- Meanwhile, in 17 conference losses, the post duo has averaged just 10.6 points and 5.4 rebounds per game.
- The top six scoring performances from the duo have all come in MVC wins, as have the top six rebounding games from the pair.

Buzzer Beaters
- Markus Golder’s 50-foot buzzer-beater for the win Jan. 2 against Illinois State added to the lore of last-second shots in Valpo history.
- It was Valpo’s first game-winner with the clock at zero since Ryan Broekhoff connected on a 3-pointer to give Valpo the 70-69 win in the 2013 Horizon League semifinal at the ARC over Green Bay.
- It was Valpo’s first game-winner from beyond halfcourt since Greg Tonagel drilled a heave from the opposite 3-point line for a 71-68 win over Belmont at the ARC on Jan. 11, 1999.
- Of course, the most famous buzzer-beater in program history came courtesy of Bryce Drew in the first round of the 1998 NCAA Tournament versus Ole Miss.
- Golder’s shot came in at the top spot on SportsCenter’s Top 10 on that night’s countdown. He became the third different Valpo athlete over three different sports to earn a SportsCenter Top 10 spot since Valpo joined The Valley.