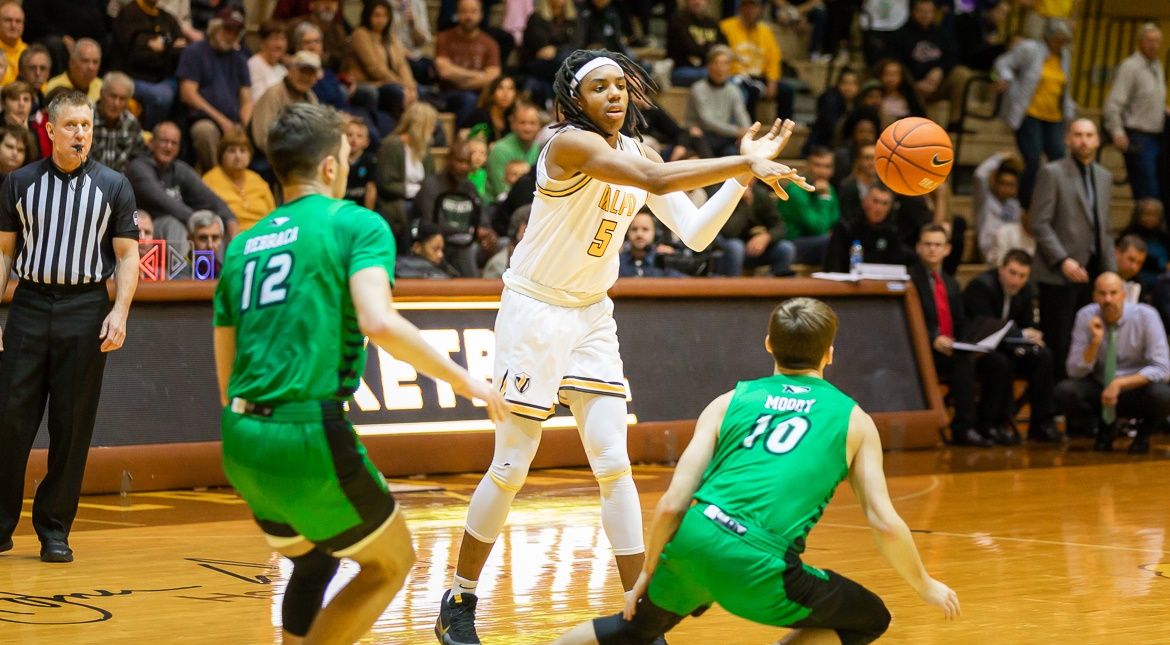 Next Up in Valpo Basketball: The Valparaiso University men’s basketball team will spend a week in the U.S. Virgin Islands as part of the Paradise Jam multi-team event. Valpo will look to build on its 3-1 start to the season with three games against quality competition this week in St. Thomas. Valpo will face off with Grand Canyon in an opening-round matchup that is slated to tip at noon Central Time on Friday.

Last Time Out: Strong performances by junior Mileek McMillan and sophomore Javon Freeman-Liberty paved the way to Valpo’s third win in four games on Sunday afternoon as the team topped North Dakota 74-60 at the Athletics-Recreation Center. Valpo was down 11-5 six minutes into the game, but the shots started falling and the hosts had a double figure lead with 4:43 left in the first half. Freeman-Liberty stuffed the stat sheet with 21 points, nine rebounds, four steals and a career-high five assists, while McMillan (16) and freshman Ben Krikke (11) both had career highs in scoring.

Head Coach Matt Lottich: Matt Lottich (57-45) is in his seventh season overall at Valpo and fourth as head coach in 2019-20. Lottich led the team to 15 victories in his third season in charge in 2018-19, the program’s second campaign in the Missouri Valley Conference. In his first year as head coach (2016-17), Lottich guided Valpo to its fifth Horizon League regular season championship in a six-year span as he led the team to 24 wins and an at-large berth into the NIT. Lottich, hired as the 22nd head coach of the Valpo men’s basketball program in April 2016, graduated from Stanford University in 2004 and New Trier High School (Illinois) in 2000.

Series Notes: Friday will mark the first all-time meeting between Valpo and Grand Canyon. Valpo has played possible second-round opponent Fordham once in program history, an 87-84 double-overtime victory on Dec. 29, 1979 as part of the KOA Classic in Billings, Mont. Valpo’s other possible second-round opponent is Nevada, another team the Brown & Gold have never played. The four possible opponents for Monday’s third and final game in the U.S. Virgin Islands (with Valpo's all-time record vs. that team listed) are Illinois State (7-8), Cincinnati (1-4), Bowling Green (1-8) and Western Kentucky (0-1).

MVC Honors: Javon Freeman-Liberty was named the Missouri Valley Conference Player of the Week on Monday, Nov. 18 after pouring in a career-high 30 points in a come-from-behind 89-76 road victory at SIUE on Tuesday, Nov. 12. He followed his career night in Edwardsville, which also featured 13 rebounds for his second career double-double, with a 21-point showing in a 74-60 victory vs. North Dakota at the Athletics-Recreation Center on Sunday, Nov. 17. In the game against the Fighting Hawks, Freeman-Liberty added nine rebounds, four steals and a career-high five assists. He enters the Paradise Jam as The Valley’s leading scorer at 22.3 points per game, an average that is tied for 26th nationally. Freeman-Liberty won MVC Newcomer of the Week once last season, but this marked his first Player of the Week honor. He became Valpo’s first MVC Player of the Week since joining the Missouri Valley Conference.

MTE Success: Valpo saw a long stretch of victories in multi-team events come to an end with an 83-71 setback against Western Kentucky in the opening game of the Myrtle Beach Invitational last year. Valpo had won 17 consecutive games as part of MTEs dating back to November 2013. Valpo is 18-2 in its last 20 games that are part of multi-team events. During that stretch, the team has won the 2014 Challenge in the Music City championship in 2014, posted a perfect record in the Beaver Showcase in 2015, claimed the MGM Grand Main Event Heavyweight Division championship belt in 2016 and shared the title with Loyola at the Savannah Invitational in 2017. Valpo’s MTE resume in recent years includes wins over Murray State (2014), Iona (2015), Oregon State (2015), Alabama (2016) and BYU (2016).

Back in Paradise: This will mark a return trip to the Paradise Jam for Valpo as the team made its way to St. Thomas for the 2008-2009 edition of the event. That marked one of the few multi-team events in recent memory where Valpo did not find success, as the team dropped games to San Diego (73-66), Iona (75-55) and La Salle (75-70, OT).

20-Point Scorers: Valpo has had at least one player score more than 20 points in each of the season’s first four games as Ryan Fazekas posted a career-high 23 in the lid-lifter vs. Toledo on Nov. 5 before Daniel Sackey followed with a career watermark of his own by scoring 22 on Nov. 9 at Saint Louis and Javon Freeman-Liberty topped everyone with a career-high 30 on Nov. 12 at SIUE. Freeman-Liberty followed with 21 points in a win over North Dakota on Nov. 17. This is the first time Valpo has had at least one player eclipse 20 points in each of the first four games of the season since 2009-10, when Brandon Wood had 25 against Ball State and 30 against North Carolina, Cory Johnson had 21 against the Cardinals, Brandon McPherson had 25 against IU South Bend and Wood had 24 against Michigan State.

30-Point Outpouring: Javon Freeman-Liberty posted a career-high 30 points on Nov. 12 at SIU Edwardsville, making him the second player in the Missouri Valley Conference to reach the 30-point plateau in a game this season, joining Missouri State’s Keandre Cook (31 vs. Alabama State on Nov. 10). Through action on Nov. 12, Freeman-Liberty was one of 37 players in the nation with a 30-point performance this year. He complemented his scoring success with 13 rebounds, marking his second-career double-double and first since Jan. 29 of last season. Freeman-Liberty became the first Valpo player to score 30 points in a game since Bakari Evelyn on Nov. 26, 2017 vs. UNCW.

30&10: Javon Freeman-Liberty had 13 boards to go along with his 30 points on Nov. 12 at SIUE, putting his performance into an elite group of Valpo players who have compiled 30 or more points and 10 or more rebounds in the same game in recent years. In fact, Freeman-Liberty and Alec Peters (six times) are the only Valpo players over the last 20 seasons to enjoy 30&10 games. Before Freeman-Liberty’s game against the Cougars, the last Valpo player not named Alec Peters to achieve that feat was Raitis Grafs, who had 30 points and 13 rebounds vs. Belmont on Jan. 10, 2000.

Comeback Kids: Although Valpo would love to avoid facing double-figure first-half deficits altogether, the team showed a knack for erasing large margins through the season’s first three games. In each game, the team made a comeback after chasing by 10, and in two of three contests the Brown & Gold have came all the way back to win.

Freeman-Liberty Turning Heads: After hitting the game-winning shot with less than four seconds remaining in the season opener on Nov. 5 at Toledo, sophomore Javon Freeman-Liberty posted his second straight 19-point effort on Nov. 9 at Saint Louis. He scored 14 of those points in a span of 4:23, accruing 14 of Valpo’s 16 points in a second-half spurt that started with SLU up 61-52 with 9:42 remaining and ended with the margin whittled to two at 70-68 with 5:19 to play. Freeman-Liberty totaled 19 points for the game, becoming the first Missouri Valley Conference player to notch his second showing of 19 points or more on the young season. This marks the first time in the sophomore’s collegiate career that he has turned in consecutive games of 19 points or better.