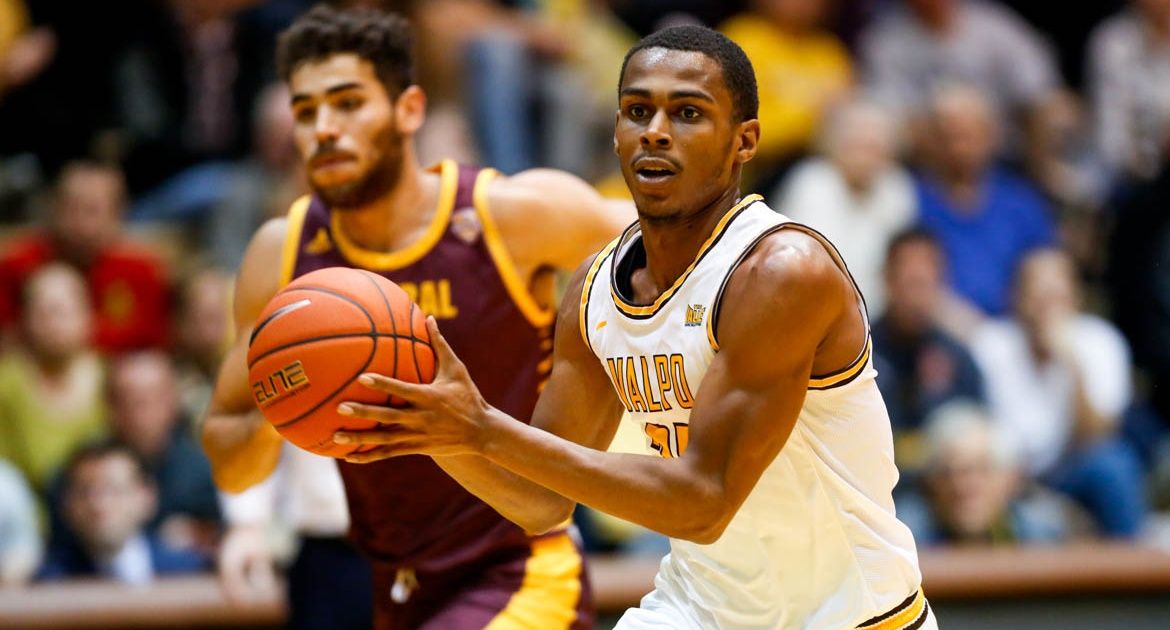 Next Up in Valpo Basketball: After a week of focusing on final exams, it’s back to the hardwood for the Valparaiso University men’s basketball team on Monday evening in Charlotte. This will mark the first of three games on an eight-day road trip that leads into a holiday hiatus. By virtue of its most recent victory, Valpo owns a winning record through 10 games for the 10th consecutive season, sustaining the program’s tradition of strong starts.

Last Time Out: Valpo delivered its most complete performance of the season, downing Central Michigan 77-55 on Sunday afternoon at the Athletics-Recreation Center. Central Michigan entered the game leading the nation in scoring average at 93.9 points per game. A stellar defensive outing saw Valpo limit the Chippewas to 33.9 percent shooting and 5.9 percent from 3-point range. Javon Freeman-Liberty (19) led four Valpo players in double figures, a group that also featured Eron Gordon (14), Nick Robinson (13) and Donovan Clay (10). The team had 24 assists on 31 made baskets.

Head Coach Matt Lottich: Matt Lottich (60-48) is in his seventh season overall at Valpo and fourth as head coach in 2019-20. Lottich led the team to 15 victories in his third season in charge in 2018-19, the program’s second campaign in the Missouri Valley Conference. In his first year as head coach (2016-17), Lottich guided Valpo to its fifth Horizon League regular season championship in a six-year span as he led the team to 24 wins and an at-large berth into the NIT. Lottich, hired as the 22nd head coach of the Valpo men’s basketball program in April 2016, graduated from Stanford University in 2004 and New Trier High School (Illinois) in 2000.

Series Notes: Valpo has won four of the six meetings between the two teams in an all-time series that has been on hold since 2006. The last time the teams faced off was Dec. 22, 2006, a 74-62 victory for the 49ers in Honolulu, Hawaii. Valpo will be back in Charlotte for the first time since Dec. 10, 2005, an 80-77 triumph. The Brown & Gold are 3-0 all-time at Charlotte. The 2006 showdown, part of the 43rd Outrigger Hotels Rainbow Classic, saw Brandon McPherson post 24 points and Samuel Haanpaa pour in 21 for Valpo.

Home Sweet Home: Valpo upped its home record to 4-0 with the Dec. 8 triumph over Central Michigan. The home success now includes two victories over Mid-American Conference teams that qualified for postseason tournaments a year ago in Toledo and Central Michigan. The team has sustained a long-standing tradition of ARC dominance, as Valpo is off to a 4-0 home start for the fourth time in five years. Valpo is 304-71 (.811) at the ARC over the last 24 years and hasn't had a losing record at home since 1991-1992.

Comeback Kids: Although Valpo would love to avoid facing double-figure first-half deficits altogether, the team has showed a knack for erasing large margins this year.