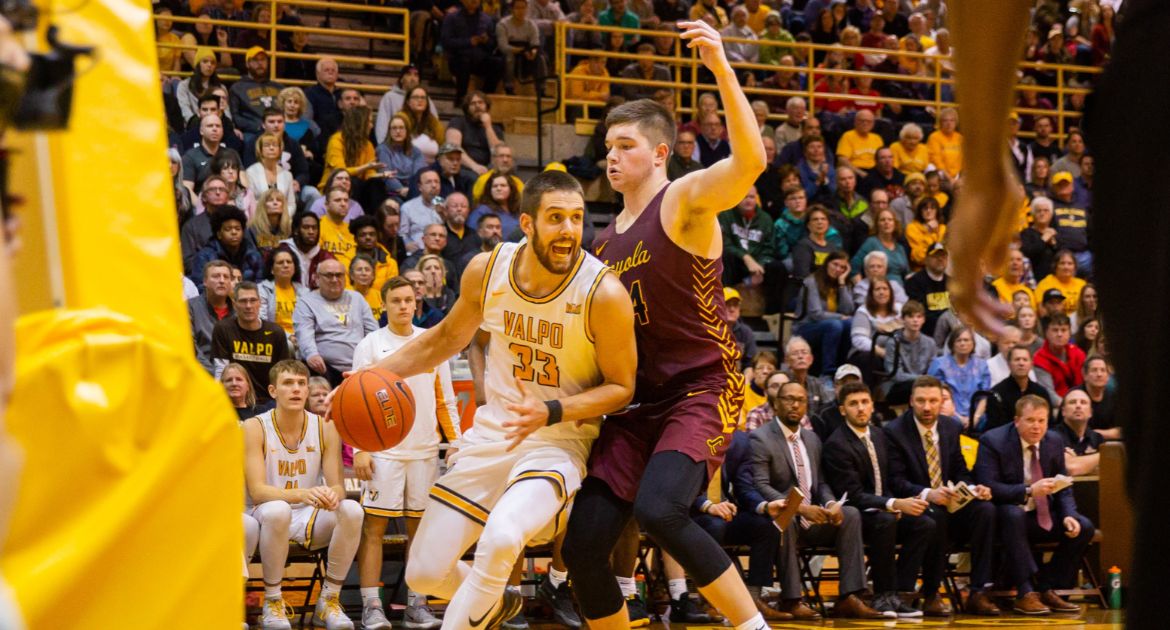 Senior John Kiser has appeared in all 15 games and made three starts this season.
Valparaiso at Southern Ill. | January 07, 2020
Related Links
Related Links

Next Up in Valpo Basketball: Carbondale is the next stop on the current road swing for the Valparaiso University men’s basketball team as the squad faces off with Southern Illinois on Tuesday night. Valpo will attempt to win in Carbondale for the second straight year after sweeping the season series from the Salukis a year ago.  This will mark the final game of a stretch where Valpo has played five out of six on the road with only one home game over a month’s time.

Last Time Out: Valpo snapped a 22-game losing streak in games at Evansville that dated back to 1969 by going into the Ford Center and beating the Purple Aces 81-79 in overtime on Saturday night. Javon Freeman-Liberty scored 19 of his team-high 25 points after halftime, leading four Valpo players in double figures. The Brown & Gold trailed by eight points with under four minutes to play, but rallied to tie the game at 70 and force the extra session. Eron Gordon (11) and Ben Krikke (10) both reached double figures off the bench, while Donovan Clay (10) made it four Valpo players with 10 points or more in the thrilling victory over a team that had gone on the road and upstaged No. 1 Kentucky earlier in the season.

Head Coach Matt Lottich: Matt Lottich (62-51) is in his seventh season overall at Valpo and fourth as head coach in 2019-20. Lottich led the team to 15 victories in his third season in charge in 2018-19, the program’s second campaign in the Missouri Valley Conference. In his first year as head coach (2016-17), Lottich guided Valpo to its fifth Horizon League regular season championship in a six-year span as he led the team to 24 wins and an at-large berth into the NIT. Lottich, hired as the 22nd head coach of the Valpo men’s basketball program in April 2016, graduated from Stanford University in 2004 and New Trier High School (Illinois) in 2000.

Series Notes: Valpo is 5-3 all-time against the Salukis in a series that began in 1929. Valpo has won three of four over SIU since joining the Missouri Valley Conference, including a pair of tight triumphs a year ago. The Brown & Gold prevailed 65-61 in Carbondale and 55-52 at the ARC in 2018-19. Prior to Valpo’s addition to The Valley, the two teams had not faced off since 1980.

Double-Figure Figures: The game at Evansville was Javon Freeman-Liberty’s 15th straight double-figure scoring output, while Donovan Clay hit double figures for the eighth time this year and seventh time in his last eight games. Eron Gordon had his fifth double-figure point total, all coming in the last eight games. Ben Krikke’s double-figure effort was his third of the year and first since Nov. 27 vs. Trinity Christian. Freeman-Liberty has scored 20 points or more in nine of the team’s 15 games this season, and Saturday marked the fourth time he’s accrued 25 points or more.

Stopping the Streak: With Valpo’s 81-79 overtime victory over Evansville, the team stopped a five-game head-to-head losing streak against the Aces and garnered its first win against Evansville since joining the Missouri Valley Conference (previously 0-4). But most noteworthy of all was the 22-game losing skid in games played at Evansville that came to an end. Matt Lottich became the first Valpo coach to win at Evansville since the legendary Gene Bartow led his team to a 101-95 victory on Feb. 1, 1969. During the years (or more accurately, decades) between those victories, five Valpo coaches went winless in the River City: Bill Purden (0-6), Ken Rochlitz (0-3), Tom Smith (0-5), Homer Drew (0-4) and Bryce Drew (0-1). No member of the Valpo team or coaching staff was alive the last time the program won in Evansville before Saturday.

Decade Openers: On Jan. 4 at Evansville, Valpo tipped off a new decade with a win for the first time since starting the 1970s by beating Brown. Valpo had lost its first contest of the 1980s (at Milwaukee), 1990s (at Notre Dame), 2000s (at UMKC) and 2010s (at Green Bay). Javon Freeman-Liberty will hold the distinction of being the leading scorer in the first Valpo game of the 2020s. Brandon Wood (2010s), Milo Stovall (2000s) and Mike Jones (1990s) are other recent players who have led Valpo in scoring in the opening game of a decade.

Working Overtime: The Jan. 4 game at Evansville was Valpo’s second overtime affair of the season and first victory. The squad came out on the wrong end of an 81-77 decision vs. Cincinnati in the U.S. Virgin Islands on Nov. 25. The win over the Aces snapped a three-game OT losing streak that also included home defeats to Indiana State and Missouri State last season and dated back to a 75-70 OT victory over SIUE at the ARC on Nov. 21, 2018. Jan. 4 at Evansville was Valpo’s first OT affair in a true road game since Feb. 26, 2016, an 80-76 win at Milwaukee in the final year of Bryce Drew’s head coaching tenure.

A Victory in Carbondale Would: Give Valpo consecutive wins in true road games for the first time since winning at Southern Illinois on Jan. 12 of last season… Allow Valpo to win its first two conference road games of the year for the second straight season… Give Valpo back-to-back road wins in succession (no home game in between) for the first time since Jan. 12-14, 2017, a sweep of a Horizon League swing to the great state of Ohio that featured wins over Youngstown State and Cleveland State.

Molding Clay: After finishing with five points or fewer in six of his first seven games, Donovan Clay has hit his stride over the last eight contests. He has made his way into double figures in scoring in seven of those. Over the last five games, Clay is 12-of-20 from 3-point range (60 percent), and he’s averaging 11.5 points per game over the team’s last eight outings, second behind only Javon Freeman-Liberty during that span. That came after Clay averaged just 3.9 points per game over his first seven collegiate appearances including a 23.5 percent clip (4-of-17) from 3-point distance.

An Eye on the Record Book: Valpo sophomore Javon Freeman-Liberty finished his freshman season with 60 steals, the third most in program history and the most by a rookie. This year, he has 37 steals with 15 games played and a minimum of 17 games remaining on the schedule, putting him well on pace to shatter Lubos Barton’s school record of 63 established in 2001-02. In addition, Freeman-Liberty is just three steals away from reaching the 100-steal milestone for his career.

Clay Has a Day: The moment didn’t appear too large for freshman Donovan Clay as he played in his first Missouri Valley Conference game on Dec. 30 vs. Loyola. He knocked down all eight of his field-goal attempts while also going 4-for-4 from 3-point distance. In addition to producing a career-high 21 points, Clay became the first Valpo player to go unblemished from 3-point distance with more than three attempts since Alec Peters also went 4-for-4 on Jan. 18, 2016 at Youngstown State. Clay became the first MVC player to have eight or more shot attempts without a miss this season and the fourth with four or more 3-point tries without a misfire. The last MVC player to go 8-for-8 or better from the field was Sean Lloyd on Feb. 27, 2019 at Evansville. Clay became the first Valpo player to go perfect from the field with eight or more attempts since Zoran Viskovic went 8-for-8 at Youngstown State on Feb. 19, 1998 and 11-for-11 at Chicago State on Jan. 31, 1998. Clay’s 21 points were the most by a Valpo player in a conference opener since Tevonn Walker started Horizon League action with a 23-point effort on Dec. 30, 2016 at UIC.

Gordon Going Off: Redshirt junior Eron Gordon had the first 20-point output of his career on Dec. 18 at High Point, going 7-of-9 from the field and 6-of-8 from 3-point distance in the process. He became just the sixth Missouri Valley Conference player to net six treys in a single game this season and the first Valpo player with more than four in a contest in 2019-20. Ryan Fazekas was the most recent Valpo player to knock down six 3s in a game, as he did so on Jan. 5, 2019 at Missouri State.

Comeback Kids: Although Valpo would love to avoid facing double-figure first-half deficits altogether, the team has showed a knack for erasing large margins this year. Five times, the team has come from double digits down to tie or take the lead including two occasions where the Brown & Gold prevailed after chasing by double figures.