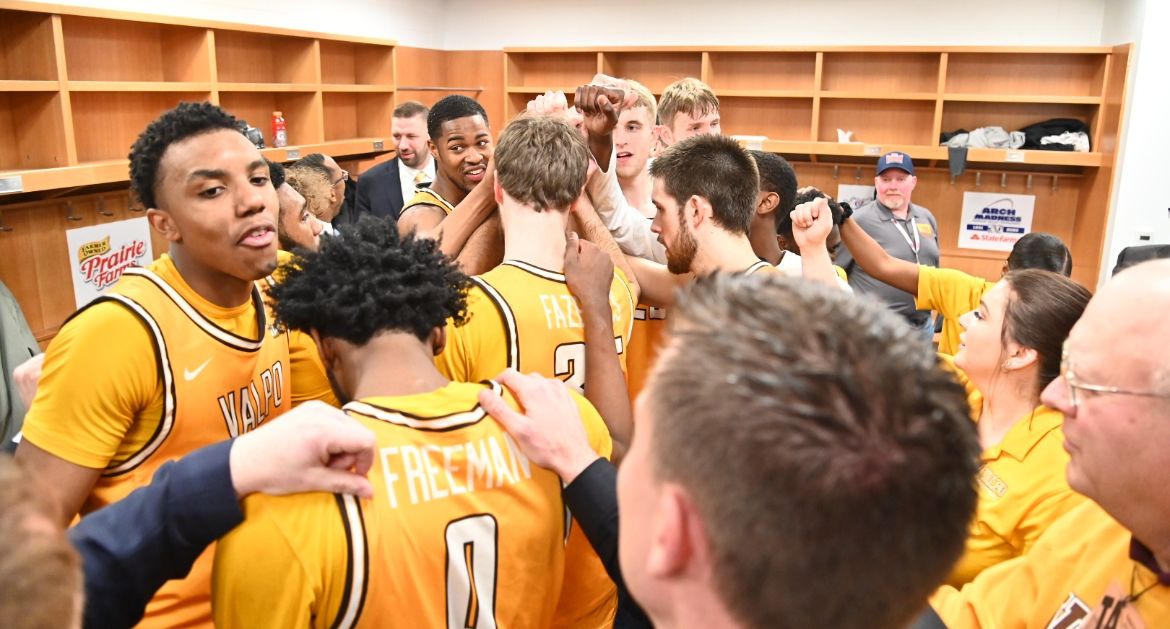 Next Up in Valpo Basketball: After upsetting second-seeded Loyola on Friday night at Arch Madness, the Valparaiso University men’s basketball team will play for a spot in the Missouri Valley Conference title game on Saturday evening at the Enterprise Center. Valpo will look to become the first team since the conference went to the current 10-team format in 1997 to play in the opening round of the tournament and reach the title game. Valpo and Missouri State tied for sixth in the regular-season standings with the Bears taking the No. 6 seed at Arch Madness by virtue of the NET tiebreaker.

Last Time Out: A season that features the motto “One Team, One Boat” to exemplify the program’s unity had its most defining team win to date on Friday night as the seventh-seeded Valpo shocked second-seeded Loyola 74-73 in overtime in the quarterfinal round of the Missouri Valley Conference Men’s Basketball Tournament in St. Louis. Another theme of the season is a no-quit attitude, one that was on full display as Valpo trailed the Ramblers by as many as 18 before pulling off the improbable victory.

The two indelible plays of the team’s biggest win since joining The Valley came courtesy of senior Ryan Fazekas and redshirt junior Eron Gordon. It was Fazekas’ game-tying 3-pointer with 11 seconds left that helped the game reach overtime, then it was Gordon’s layup on a pass from John Kiser in the final seconds of OT that added to the list of March moments etched into the program’s proud past.

Head Coach Matt Lottich: Matt Lottich (72-59) is in his seventh season overall at Valpo and fourth as head coach in 2019-20. Lottich led the team to 15 victories in his third season in charge in 2018-19, the program’s second campaign in the Missouri Valley Conference. In his first year as head coach (2016-17), Lottich guided Valpo to its fifth Horizon League regular season championship in a six-year span as he led the team to 24 wins and an at-large berth into the NIT. Lottich, hired as the 22nd head coach of the Valpo men’s basketball program in April 2016, graduated from Stanford University in 2004 and New Trier High School (Illinois) in 2000.

A Victory on Saturday Would…

Series Notes: Valpo is 2-5 against Missouri State since joining the Missouri Valley Conference including a season-ending 83-79 setback on March 1, 2018 at the MVC Tournament in St. Louis. The Brown & Gold hold a 9-19 record in an all-time set with Missouri State (previously known as Southwest Missouri State) that dates all the way back to the 1966-67 campaign. The two teams split the regular-season series with both teams defending their home courts.

Valpo 89, Missouri State 74 (Feb. 25): With star player Javon Freeman-Liberty sidelined by an illness, Valpo exemplified the “next man up” mentality in the 89-74 victory over Missouri State at the ARC. Ryan Fazekas had 20 points including a 5-of-6 effort from 3-point distance and John Kiser had a career-high eight assists as the senior duo helped make sure their senior night was a winning one. Freshmen Ben Krikke and Donovan Clay combined for 36 points, and sophomore point guard Daniel Sackey had the second-highest point total of his career with 14. Valpo shot a season-best 58.6 percent from the field.

Missouri State 67, Valpo 60 (Jan. 23): An improved second half was not enough in a 67-60 defeat to MVC preseason favorite Missouri State at JQH Arena earlier this season. Valpo attempted 39 3-point tries – the program’s most since at least the start of the 1989-90 campaign – but hit just 20.5 percent and went 2-of-20 from distance in the first half. Valpo held Missouri State to 6-of-25 (24 percent) shooting after halftime while hitting at a 44.1 percent clip from the field. The guests outscored the Bears 44-31 in the second half, but the 20-point hole through 20 minutes was too much to overcome. Mileek McMillan scored 12 points to lead the team in scoring for the first time in his career, while Javon Freeman-Liberty and Daniel Sackey joined him in double figures with 11 points apiece.

* Single-season record for points by a sophomore.

From Sophomore Slump to Junior Jump

Turnaround Talk: Valpo turned a 13-point loss from the Jan. 7 date at Southern Illinois into a 17-point win over the Salukis on Feb. 12. That marked the first time Valpo turned a double-figure defeat from the first meeting into a double-figure win in the second meeting since joining The Valley. The program didn’t have to wait long for the second such instance, as Valpo turned an 80-69 defeat from Jan. 29 at Bradley to a 90-78 victory over the Braves on Feb. 22 at the ARC. Before this season, Valpo hadn’t lost the first game of a conference double-round robin by double figures and turned it around to win the second matchup by double figures since 2008-09 in Horizon League play against Loyola.

Another Valley Honor: For his efforts in the Valpo victories over Southern Illinois and Illinois State, Freeman-Liberty was awarded the Missouri Valley Conference Player of the Week on Feb. 17. He averaged 19.5 points and 7.0 rebounds per game over the two contests leading up to the honor. That marked the third time this season Freeman-Liberty has received MVC Player of the Week honors.

JFL Doing JFL Things: Javon Freeman-Liberty worked his magic on Feb. 15 at Illinois State, propelling the team to the 65-62 victory from 17 points down. He scored 19 of his game-high 25 points after halftime, going 8-of-9 from the field after the break. He finished with a career-high five steals including two in the final 15 seconds while also totaling seven rebounds and three assists. It was Freeman-Liberty’s seventh game this season with 25 points or more, his 13th game with 20+ points and at the time his 27th straight game with 10 points or more.

Defense Dominates: The accomplishments of the Valpo defense were numerous in the 55-38 victory over Southern Illinois on Feb. 12 at the Athletics-Recreation Center.

Cruising to Victory: Blowout victories in league play have been hard to come by since Valpo joined the Missouri Valley Conference given the quality of the competition. But the Feb. 12 triumph over Southern Illinois was a rare exception with Valpo rolling to the 55-38 win. The 17-point margin of victory equaled Valpo’s largest since joining the conference. The team previously topped Drake 77-60 on Jan. 10, 2018. It was also Valpo’s second-largest margin of victory against a Division-I team this year behind a 22-point win over Central Michigan.

Enough to Win: Valpo didn’t put on a scoring clinic in the Feb. 12 game against Southern Illinois, but the 55 points were more than enough to emerge victorious. Valpo improved to 1-4 this season and 3-25 under Matt Lottich when scoring fewer than 60 points. Two of the three victories under Lottich when scoring under 60 have come against Southern Illinois at the Athletics-Recreation Center as Valpo beat the Salukis 55-52 last season. The other such win was 58-56 over Illinois State to start conference play last year. Over the last five seasons, Valpo has just two victories when scoring 55 points or fewer, both against Southern Illinois. The last time Valpo prevailed with a lower point total was 54-44 over Green Bay in the 2015 Horizon League Championship to advance to the NCAA Tournament.

Setting the Tone: Valpo set the tone for the memorable defensive evening in the first half on Feb. 12 vs. Southern Illinois, holding the Salukis to 16 points. Previously, Valpo’s best defensive half in conference play this season was allowing 23 points against Evansville and the season low was 22 permitted against Central Michigan. The 16 points were the low for a Valpo opponent in a half since the team held Milwaukee to 16 in the 2017 Horizon League Tournament. (We’ll whisper this part: The Panthers led 16-12 at halftime of that game.) The 16 points tied for the fewest allowed by Valpo in a half since March 22, 2016, when the team limited St. Mary’s to 13 points after halftime in an NIT game at the ARC.

#SCTop10 Again: Javon Freeman-Liberty slammed home a poster dunk in the first half of this season’s game at Southern Illinois, gaining national attention as the play appeared on ESPN throughout the evening. The play checked in at No. 5 on SportsCenter’s Top 10 plays, marking the second time this season that the program has been featured on the daily countdown, as Daniel Sackey had the No. 9 play for an August buzzer-beater to top Carleton as part of the program’s foreign tour. Since Valpo joined the Missouri Valley Conference, the University has been featured on SportsCenter’s Top 10 plays on seven occasions spanning five sports – men’s basketball (three times), women’s basketball, softball, men’s soccer and volleyball.