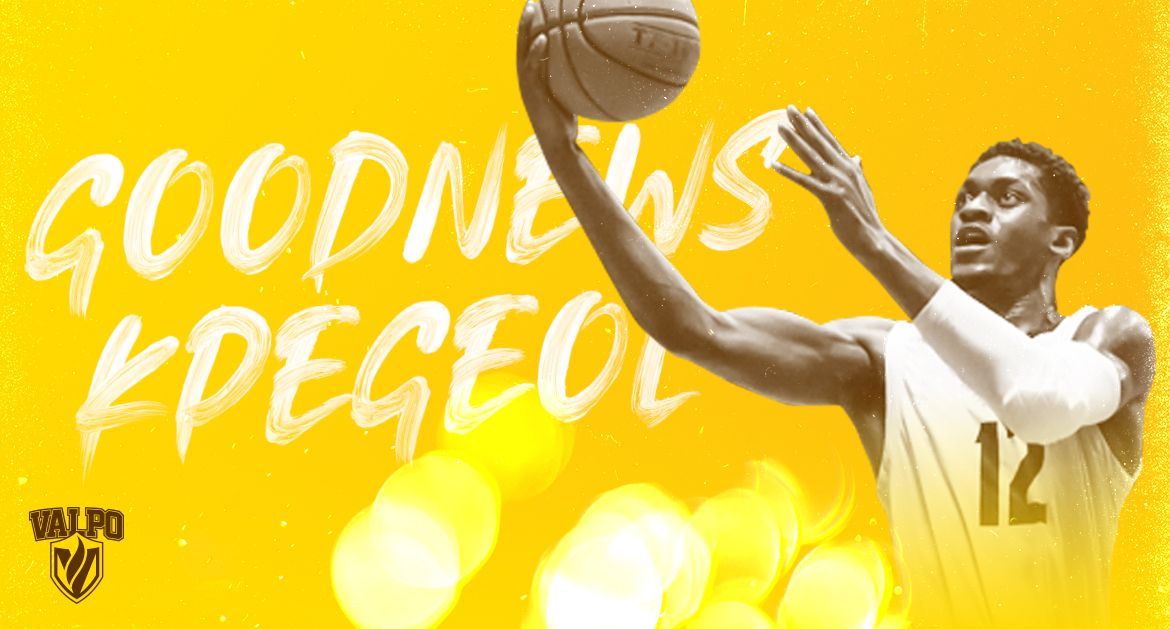 The road to get there was different from that of his teammates, but the destination was the same for Valparaiso University men’s basketball redshirt sophomore Goodnews Kpegeol (St. Paul, Minn. / North St. Paul [Southwest Mississippi CC / Kansas State]).

In just over two years since graduating from North St. Paul High School in Minnesota, Kpegeol is on his fourth stop after spending time at Taylor Made Prep, Kansas State University and Southwest Mississippi Community College. But finding Valpo as his landing spot was worth the wait for the 6-foot-6 guard.

“I like this University a lot; it’s very welcoming with a great atmosphere,” Kpegeol said. “The campus is very nice and peaceful. I’ve had a great time and my teachers have been very helpful when I ask questions in my classes. My teammates have been there for me if I need help finding a book or locating a class. I’m off to a good start with everyone.”

Kpegeol averaged 15.6 points, 5.6 rebounds and 4.2 assists at Taylor Made Prep in 2018-19 before transferring to Kansas State at the semester break and sitting out the remainder of the season. He moved on to Southwest Mississippi in 2019-20, averaging 12.0 points, 5.8 rebounds and 2.6 assists during his junior college season.

“Not everyone’s journey is the same,” Kpegeol said. “No matter what route you take, as long as you have a goal that you want to fulfill and keep working toward it, you can get good results. I’ve met new people at each stop along the way, and I’ve gotten to see a lot of different cultures.”

Kpegeol was a four-year letter winner at North St. Paul, where he led his team to a 22-5 overall mark and 15-1 conference record as a senior. He played for head coach Damian Johnson, who played collegiately at the University of Minnesota before going on to a professional basketball career from 2010-2016.

“Goodnews is a very versatile player; we used him in a lot of different ways,” Johnson said. “He’s a good midrange shooter, and we used him in the high post, as a wing and at point. We were able to create mismatches for opposing teams. He’s very good at playing off the dribble and is super athletic. It was difficult for high school players to match up with him.”

Johnson was teammates with Valpo head coach Matt Lottich in Japan when both played for the Oita Heat Devils in 2010-2011.

“Coach Lottich and I are similar in our personalities and how we coach,” Johnson said. “The school, the conference and the relationship that Matt and I have made Valpo a great fit for Goodnews. He knows he has a coach who has his best interests in mind. Coach Bowen is from Minnesota and has strong ties in our state. Everything worked out perfectly for him to have the opportunity to play at Valpo.”

Kpegeol averaged a team-best 18.2 points per game over 19 contests during the 2017-18 campaign, his senior season. He surpassed 20 points on nine occasions. During his sophomore year, North made its first trip to the Class 4A state tournament in 17 years and finished with a 24-6 mark.

“One play that will stand out in my mind for a while is when our point guard threw a contested layup hard off the backboard,” Johnson said. “Goodnews flew out of nowhere with a two-handed dunk over a player’s head. It was one of the most athletic plays I’ve ever seen. His hands were at the top of the square. It was one of the best in-game dunks I’ve seen at the high school level.”

The son of Charity and Letom, Kpegeol has a sister, Peace, and three brothers – Confidence, Bright and Wisdom.

“My parents told me that they believe I can bring something good into the world,” Kpegeol said when asked about the origin of his first name. “They wanted my name to have a positive meaning and give me something good to live by.”

Kpegeol is hoping to bring good news to Valpo fans over the course of the 2020-2021 season.

“I came here to help our team win a conference championship,” he said. “That’s the main goal. I want to come in and bring energy and click with my teammates. I can already tell our team has a very good connection outside of basketball. We all like each other. If we keep that attitude, we’ll be able to achieve a lot this season.”