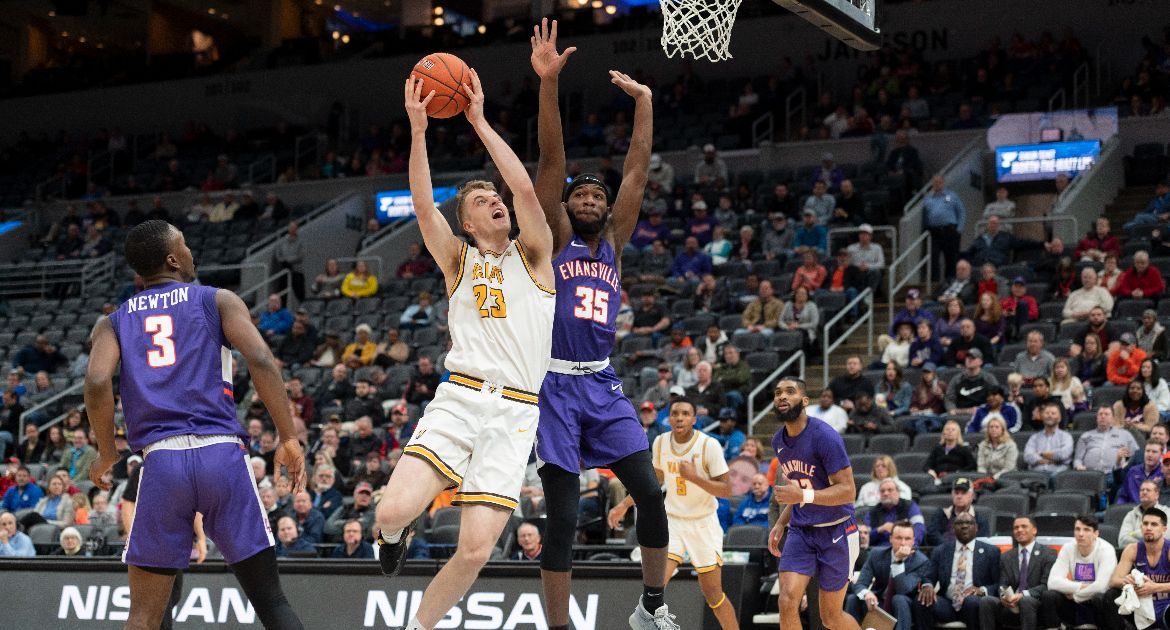 For followers of competitive athletics, ice hockey is the sport most closely associated with Edmonton, Alberta, Canada. However, it’s not the only sport played in the city currently hosting the National Hockey League postseason bubble.Valparaiso University men’s basketball sophomore Ben Krikke has always been more attracted to the hardwood than the rink, much to the delight of Valpo fans who saw the Edmonton native’s key contributions to the Missouri Valley Conference Tournament runners-up in 2019-2020.

“I never really played any ice hockey,” Krikke said. “I did play a lot of other sports, including badminton, volleyball and various track & field events. When I was 13 or 14, I decided to pursue basketball at a higher level. My dad played college basketball in Alberta and has run a basketball camp for over 20 years. He has a set of Michael Jordan DVDs, so I would always watch those highlights and games. I had a hoop at home and loved to work hard and play the game as a kid. My dad has been a big influence on my basketball career.”

Krikke burst onto the scene as a freshman for head coach Matt Lottich’s team, appearing in 33 games and averaging 6.7 points and 2.9 rebounds per contest while blocking 15 shots, coming up with 15 steals, draining 14 3s and handing out 22 assists. The 6-foot-9, left-handed forward shot 55 percent from the field, finishing fifth in the conference and second among freshmen in field-goal percentage.

“Making the leap from Canadian high school basketball to the NCAA Division-I level was quite drastic,” Krikke said. “It was all about adjusting to the speed of the game and the size of the players. I think I was able to adjust quite well to my role as a contributor to the team. It was a little bit different being away from home for an extended period of time, but I made that adjustment rather quickly.”

Krikke had two double-figure scoring outputs in the MVC Tournament, contributing to Valpo’s historic run to the conference title game. The team became the first in the history of Arch Madness to play in the opening round and advance all the way to the final. The Jasper Place High School product put together an 11-point effort that featured seven made free throws in the March 7 semifinal victory over Missouri State.

“I was very thankful we had a conference tournament before the season was shut down due to COVID-19,” Krikke said. “Several of my buddies who play in other conferences didn’t get to play their tournaments. I was happy to get that experience, especially as a freshman. Playing in front of a lot of excited fans was memorable. We made a nice run and came up a little bit short.”

Krikke scored in double figures nine times as a freshman, including three games with 15 points or more. He also enjoyed eight instances of five or more rebounds. One highlight occurred on Feb. 1 vs. Illinois State, when he became the first Valpo freshman in over 30 years to lead the team outright in points, rebounds and assists in a single game by posting a stat line of 17 points, eight boards and four assists. He had a team-high 15 points and tied for the team lead with seven caroms on Feb. 12 vs. Southern Illinois, his second time in a four-game span pacing the team in scoring.

“During the offseason, I’ve focused on shooting and trying to hit shots at a higher rate, especially from 3,” Krikke said. “I’ve worked on getting stronger and gaining some size. I’ve also worked on dribbling and ball handling in general so I can be as versatile as possible if Coach needs me on the perimeter.”

Away from basketball, Krikke enjoys fishing, mountain biking and playing chess. He learned how to play chess from his grandfather and has developed into an avid player. On the court, he’s focused on helping the program continue its ascent to new heights.

“As a team, we’d love to win at a high level and improve on our successes from last year, especially how we ended with a good run,” Krikke said. “We want to carry that over to this season and win the conference tournament. The new players have been great; we have a very cohesive group. We enjoy being around each other and we’re excited to work hard every day.”