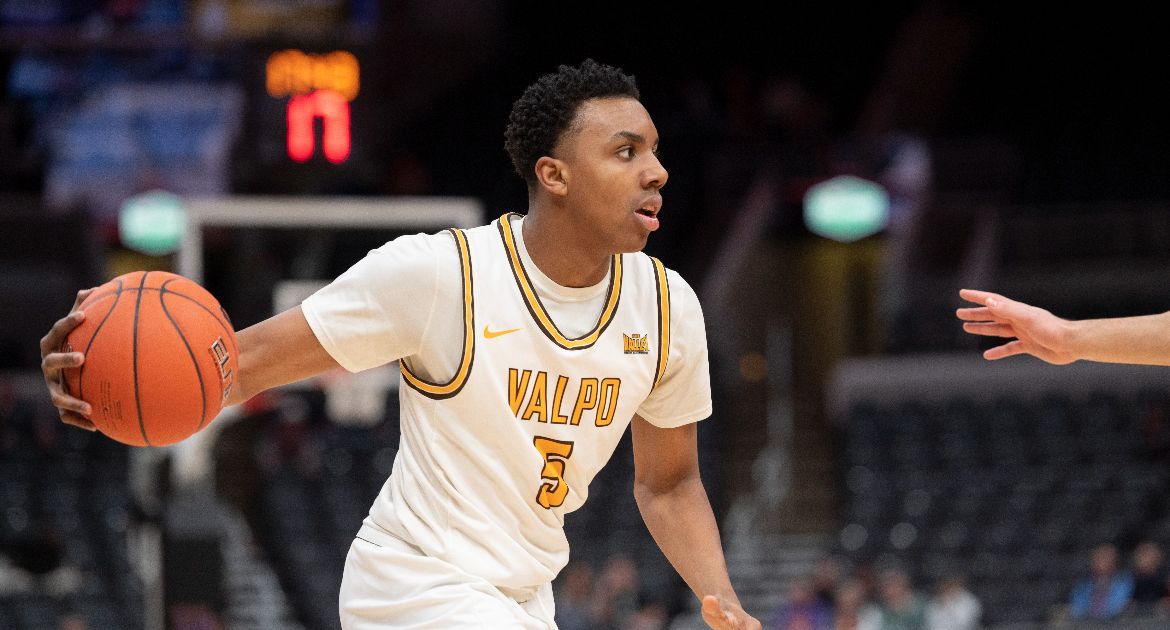 With a year of college experience under his belt, Valparaiso University men’s basketball sophomore Donovan Clay (Alton, Ill. / Alton) has a simple piece of advice for the program’s new crop of rookies.

“As a freshman, the best thing you can do is work,” Clay said. “You come in with seniors, juniors and sophomores who all have more experience in the program, so all you can do is put in work. Another tip I would give them is to do your homework and make sure you prioritize school. It’s been great to have this year’s newcomers with us; they certainly know how to play. We love each other and we’re well connected as a team.”

After scoring in double figures just once over his first seven games in 2019-2020, Clay did so in 18 of the next 28. He had seven or more rebounds in 10 of the season’s final 21 games after reaching that mark just once in the first 14 contests. Clay’s clear progression from the season’s early stages to its climactic conclusion helped the Alton, Ill. native land on the Missouri Valley Conference All-Freshman Team.

“I had to get used to bigger, stronger and faster opponents,” he said. “You go from being the best player on your team in high school to playing against players who were all the best on their teams. You have to come in ready to work. My coaches and teammates had confidence in me and knew my potential. I flourished as the season moved along.”

Clay was one of two Valpo players to compete in all 35 games in 2019-20 and made 33 starts during his freshman campaign. He finished third on the team in scoring (9.4 ppg) and second in rebounding (4.6 rpg) while leading the team in blocked shots with 36. He started conference play sixth on the team at 7.8 points per game, then scored 10.9 per game in Valley action, third on the squad. This offseason, he’s put in the work necessary to continue his progression.

“The offseason was a grind,” Clay said. “I put a lot of focus on my shot. I also worked on agility, trying to get faster and being able to jump higher. I worked hard, and hopefully that makes an impact on my game this year.”

When he has a few minutes of free time away from the basketball court, weight room and classroom, Clay enjoys other sports and can be found tossing a football or baseball. But perhaps his biggest passion away from the hardwood comes in a virtual space, as he is an avid gamer who is very skilled at NBA 2K. Clay has perhaps inherited the distinction of the team’s top gamer with the graduation of Ryan Fazekas, who is as well known for his video-gaming prowess in some circles as he is for his 3-point shot in others.

“I play online all the time,” Clay said. “I’m about to start streaming so people can watch me play. Whenever I’m not working out and I’ve got a little free time, I play 2K.”

Valpo’s surge to the title game of the State Farm MVC Tournament last March may have come as a surprise to some, but not to those inside the Valpo locker room. And Clay believes this team is well positioned to pick up where it left off a season ago.

“It came down to chemistry,” Clay said. “Our team was so loose and well connected. We knew we were going to go on a run at some point, and it came at the perfect time. That’s all about chemistry and togetherness. This year, we have a bunch of individuals willing to work who love to be here. Everybody wants to get better, and our goal is to win as much as we can.”