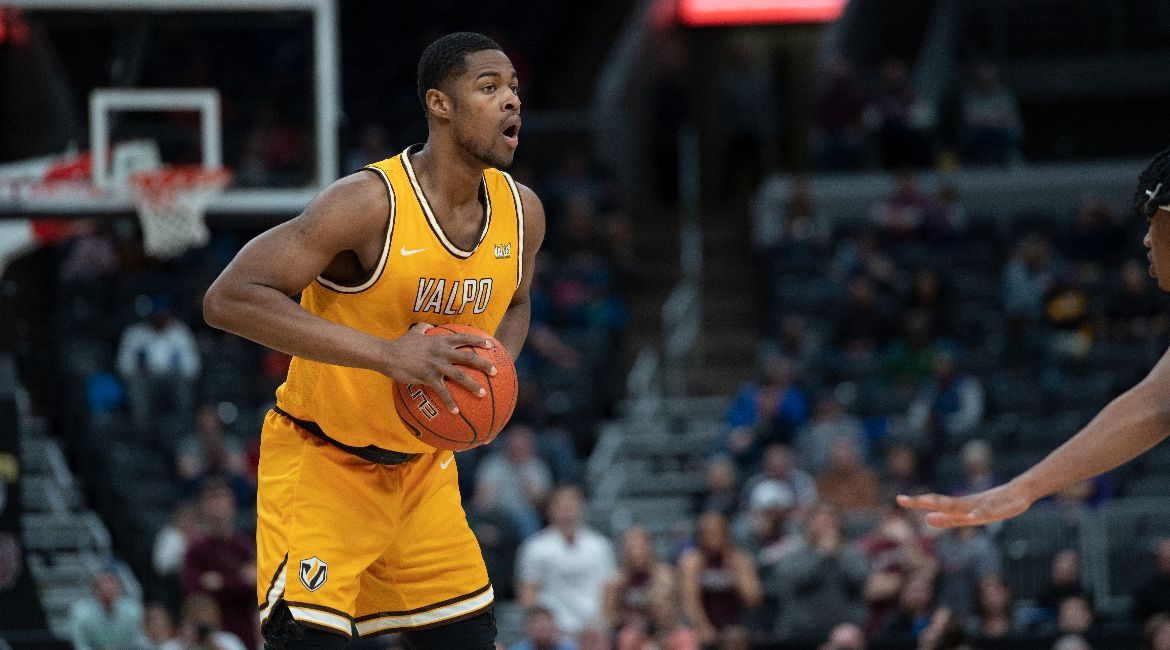 Mileek McMillan boosted his scoring average from 2.8 points per game as a sophomore to 8.8 as a junior.

The statistical leaps may have come as a surprise to some, but in reality, Valparaiso University men’s basketball senior Mileek McMillan’s place on the Missouri Valley Conference Most-Improved Team following his junior season in 2019-2020 just followed a trend that has been unmistakable from the early stages of his basketball career.

After all, McMillan was cut from his middle-school basketball team in seventh grade, made the “B” team in eighth grade and missed his freshman year of high school with an injury. The same work ethic that transformed him from an unheralded youngster to a Division-I basketball player showed through yet again in the improvement McMillan made between his sophomore and junior seasons.

“I changed my focus and really locked in,” he said. “I changed my body and got in better shape. I picked one thing to really focus on that I knew would translate to games, which was shooting. I knew if I could knock down the 3, I could be a threat for our team. My ability to stay on the court because I was in better shape also helped me reach those numbers. I locked in on playing basketball and didn’t let anything else distract me.”

McMillan boosted his scoring average from 2.8 points per game as a sophomore to 8.8 as a junior. The Merrillville, Ind. native and Merrillville High School product started all 34 games he played in 2019-2020 after making just one start and averaging 8.1 minutes per game as a sophomore. The 6-foot-8 forward over doubled his rebounding average from the previous season, going from 1.5 to 3.2. Perhaps the most substantial improvement of all came from the 3-point arc, where he went from hitting 10 triples as a sophomore to knocking down 40 as a junior and shooting 42.3 percent from distance during MVC play.

“I knew we wanted to start playing more five out and not use a traditional ‘five’ on offense,” McMillan said. “I needed to be someone who could pick-and-pop and play on the perimeter more. If our ‘five’ spent a lot of time in the paint, it would throw off the spacing. I knew if I could shoot the 3, it would change the whole dynamic of our offense and allow us to have more spacing going to the basket.”

Consistent with his track record, McMillan has spent the current offseason focused on further improvement after performing as one of The Valley’s breakout players in 2019-20.

“I improved my ball handling and ability to shot fake and get to the basket in one or two dribbles,” McMillan said. “Being able to get past my man and create for my teammates is important. I want to play with a better pace and be able to find contact. I’ve worked on mental things and little things that will help me be in a better position on the floor.”

McMillan enters the season as the longest tenured player in Valpo’s program and the only four-year member of the team. He cites staying close to home as a key factor in his college choice. His twin brother Mahqueese chose to go to Cal State Los Angeles, so McMillan wanted to stay close to home for their mother, Latina Cross.

“We’re very close to our mom, and I knew it would be tough on her if both of us were far from home,” McMillan said. “That was the main reason I chose Valpo. Also, I like the prestigious University and the basketball program’s tradition of winning and sending players to the professional level, whether it’s overseas or in the NBA. It was a win-win situation to be able to be close to home and my mom and to attend a school like that.”

Away from basketball, McMillan spends time playing with his dog, roller skating and playing chess. He also enjoys looking at the sky, especially prior to rainfall or during a sunset. McMillan’s long list of interests also includes nature and listening to the sound of trains. But anyone who’s been around the Athletics-Recreation Center at any hour over the last four years knows that he spends much of his free time with a basketball in his hand, effort that he hopes will pay dividends for himself and his teammates again this season.

“The vibe around the team has been great,” he said. “Everybody comes to practice trying to get better every day. It’s been very competitive. Nobody likes losing or wants to lose. We’re all pushing each other to get better. The new players are soaking everything up like sponges. They’re willing to learn and coachable. They’re excited to be a part of a great tradition and our culture. We’re excited to continue to build that culture together.”