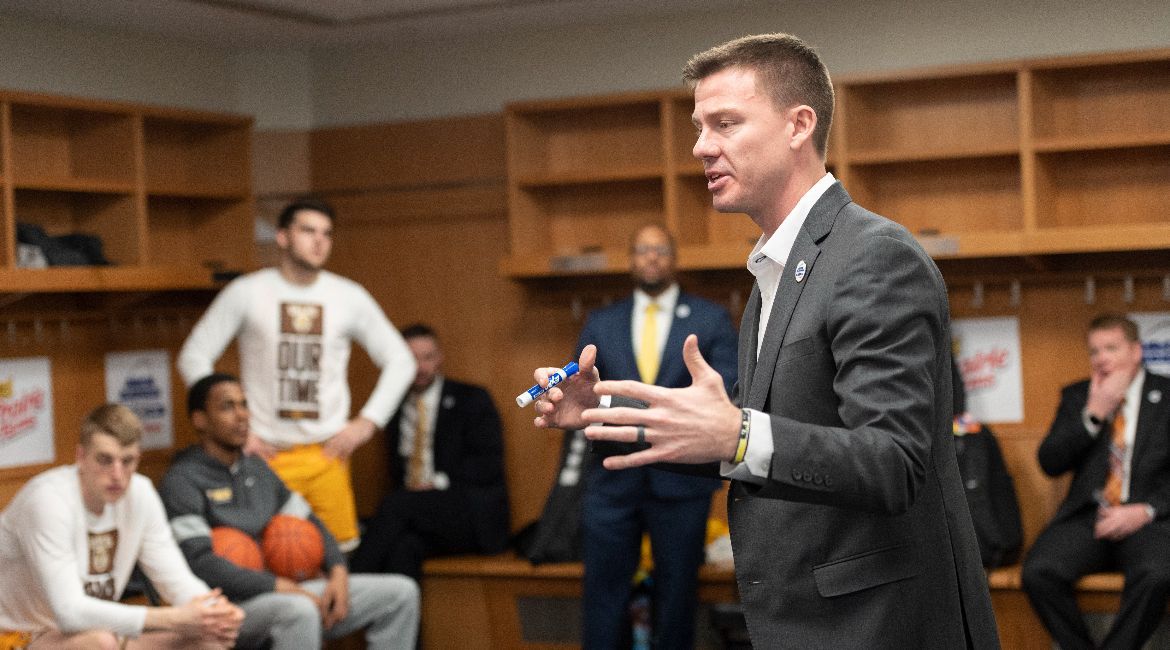 The Valparaiso University men’s basketball program has announced a trio of incoming freshmen for the 2021-2022 academic and athletic year.

“In our recruiting, we try to identify student-athletes who fit together and fit what we’re trying to build on and off the court,” head coach Matt Lottich said. “Anyone who watched us play last year knows we’re transitioning to an offensive style that we call controlled freedom. We need players who are less specialists who can dribble, pass and shoot. All of our signees have very high intellect on the court. We felt each of them fit our institution and had a strong desire to be here. This group is all about building a championship program at Valpo, and we’re excited about that.”

DeAveiro’s father David is the former head coach at McGill University in Montreal and has had a longstanding relationship with the Valpo coaching staff. In addition, DeAveiro was teammates with Valpo sophomore Ben Krikke on the Canadian national team, and DeAveiro’s father coached Valpo junior Daniel Sackey on the cadet national team.

“We’ve been familiar with Darius from a young age,” Lottich said. “I had conversations with Ben about what type of fit he would be with our program, and Ben was adamant that he would be a great fit from a talent and culture perspective. Darius started for a very talented high school team last year. He’s definitely a winner and you can tell he’s a coach’s son. He plays the game the right way.”

A six-foot point guard, DeAveiro helped his team to Ontario Scholastic Basketball Association (OSBA) championships in 2018, 2019 and 2020 and earned 2020 Academy Defensive Player of the Year. He received first team all-star status at the 2019 Canadian National Championships while leading his team to a silver medal. He was a multi-year Team Ontario captain and earned a place in the 2019 U19 Junior National Team Camp.

DeAveiro led the OSBA in assists and steals in 2019. In 2018, he earned a bronze medal at the Canadian National Championships after garnering a gold medal at that event in 2017. A 2018 Biosteel Futures All-Canadian game selection, DeAveiro was a member of the 2015-2016 Canada Basketball Junior Academy.

“One main factor that went into my college decision is how well Valpo treats Canadian players,” DeAveiro said. “I know Ben and Sackey have both talked about how they were welcomed with open arms. Another factor is the relationships that I’ve built with Coach Gore and Coach Lottich. Although I couldn’t come down for an official visit due to the pandemic, my parents and I became really comfortable with the coaching staff through Zoom calls and we like the feel of the University and program.”

DeAveiro averaged 7.2 points and 5.4 assists while shooting 41.9 percent from the 3-point line for Orangeville Prep last season. He was asked to serve primarily as a distributer for his talented team a year ago, but has been asked to score more this season and has done so successfully in preseason intrasquad scrimmages.

“I like to get downhill and create for my teammates while taking my shots when they are available,” DeAveiro said. “I’ve been a captain twice in high school, so I bring some leadership. I also bring a winning background after winning three straight national championships in Canada. I’m hoping to come in and be a leader while also learning from the returning players my first year. I try to be vocal and have a good basketball IQ. I come to practice and work hard every day with a positive attitude."

Away from the hardwood, DeAveiro is an avid football fan. He also played soccer until his freshman year of high school, when he gave up the sport to focus on basketball. He played on the state team for soccer at age 13 and traveled significantly for the sport, including a trip to England. He also enjoys golf, tennis and numerous other sports.

“I’m excited to get down to Valpo and learn from the coaching staff,” he said. “I feel relieved that I’ve signed, but I’m still trying to get better each year. Some people don’t reach their potential as a senior in high school. I’m trying to keep learning and putting in the work. When I get to college, I’ll be back to level one, so I have to keep working and learning each year.”

“Trey was a young man who we had at our elite camp,” Lottich said. “We’ve known about Trey for quite a while. He has size and versatility. He played point guard for his high school team, and he’s played the five position some as well. He’s one of those players who does a lot to help your team win, some of which shows up on the stat sheet and some of which doesn’t. He’s all about getting wins for his team. Trey is someone who we thought fit with what we’re trying to build in our program and at our institution. He’s a jack of all trades who is going to score, rebound and pass. We’re really excited about what he’s going to bring to our team.”

“Valpo fit all the requirements for me,” Woodyard said. “It’s a great academic school. I met with one of the professors and loved her. It’s a basketball school in a great conference in the MVC. The Lutheran element is significant to me as well. I love all of the coaches and talk to them frequently, especially Coach Holloway. I can’t wait to be a part of the Valpo experience every day.”

In the classroom, Woodyard has maintained a grade point average of 4.0 throughout high school, earning a place on the honor roll every year. He is an all-academic team honoree and a member of National Honor Society.

“I consider myself a glue guy,” Woodyard said. “I bring shooting ability and attention to detail to the team. All of the little things matter on the basketball court and in the classroom. I’m excited to major in exercise science at Valpo and pursue physical therapy. I’m confident that the Valpo professors will push me to achieve my goals academically. It feels good to make the dream of playing Division-I basketball a reality and make my parents proud.”

“Cam is another young man who we’ve known about for quite some time,” Lottich said. “We recruited one of his older high school teammates who is now playing for a different Division-I program, and we came away thinking that Cam was awfully good. We followed his career and were always impressed by his size at the guard position and his ability to be a physical guard. He was very productive last year in a lot of ways. He can score and can really pass. We initially wanted to see him shoot better, and he shot over 40 percent from 3 in last year’s high school season and is shooting the ball great right now. He has a high IQ and I think he’ll be a great Missouri Valley Conference guard. We’re excited about adding Cam to our culture as a building block for a championship team.”

A two-time all-conference selection, Palesse was also all-conference honorable mention as a freshman. Away from the court, he participated in Black Student Union and ran for president of the organization. He competed in volleyball as a freshman and football was his first love as a child.

“The main thing that stood out to me about Valpo is the relationships the coaches developed with me,” Palesse said. “They stayed with me for two years and I knew it was the perfect fit. We developed those relationships over time. I was trying to find somewhere that was a great fit with great basketball and Valpo was a yes for both. The coaches never lost faith in me and stayed with me through the whole process.”

Palesse has been a winner from a young age as his eighth-grade team won a national championship. Off the court, he enjoys building fish-tank ecosystems. He plans to study business management or criminology.

“I think I have really good intangibles,” Palesse said. “Scoring is probably my best attribute, but I also rebound, play defense and make plays. Signing to play Division-I basketball is a dream come true. Every kid dreams of becoming a Division-I athlete. The fact that I was lucky enough to achieve that goal means a lot to me.”