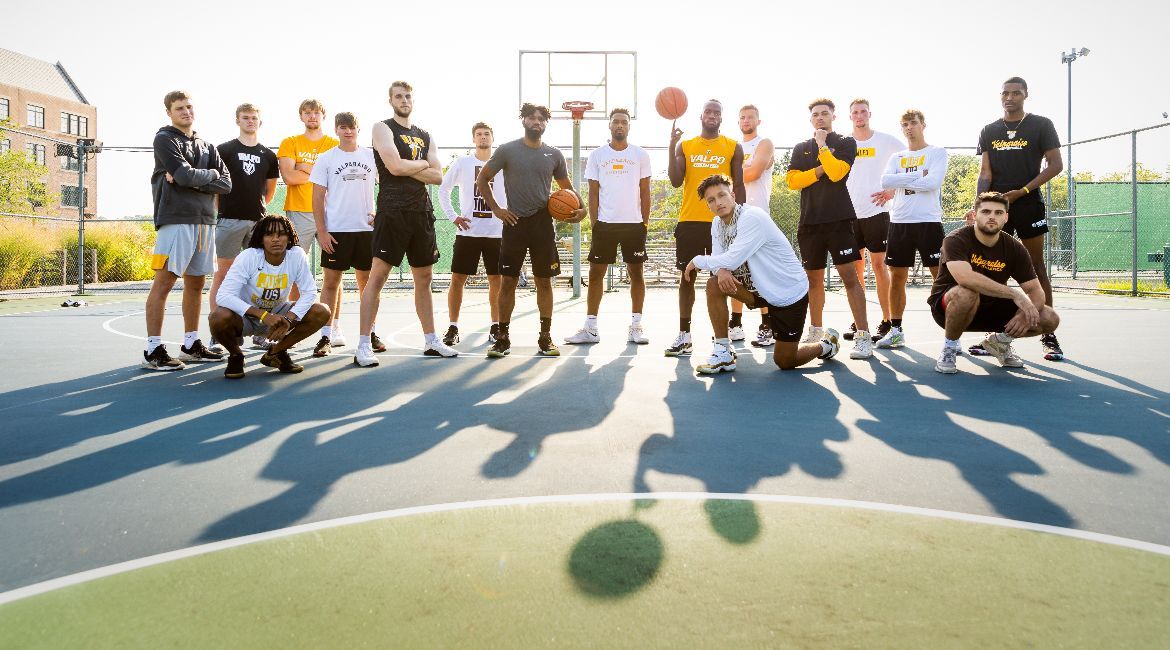 The long wait is finally over.

For the first time since Feb. 25, 2020, the Valparaiso University men’s basketball team will play a game at the Athletics-Recreation Center that is open to the public on Saturday night. A new team with a new nickname will provide a new energy in the ARC starting at this week’s Community Welcome Back Night, an exhibition game vs. Ashland that begins at 6 p.m.

“It’s going to be tremendous to have fans back at the ARC,” head coach Matt Lottich said. “We were very thankful to be able to play last year with everything going on, but it’s just not the same. The fans bring a lot of energy to the players, to the building, to the community, to us as coaches and to the University. The fans have really been out supporting our fall sports. It’s been great to see football and volleyball so well attended. Soccer is having an excellent year; tennis had a great fall. It’s been an outstanding fall for the Beacons, and we’re super excited to do our part to continue a great year for our athletic department.”

Chairback seats are available for Saturday’s game for the discounted price of $10 and bleacher seats are discounted to $5. A Halloween costume contest will add to the fun with prizes available for the winning costumes. Visit valpoathletics.com/tickets/ or call 219-464-5233 to purchase tickets or for more information.

Simply returning to the ARC is reason alone for joy, and there are plenty of reasons for added excitement surrounding the on-court product this season. The Beacons will feature a compelling blend of returning players, transfers and freshmen.

Krikke led the team in scoring both overall (12.3 ppg) and in conference-only action (13.1), boosting his scoring average by 5.6 points per game from the previous season. The Valpo forward earned MVC Scholar-Athlete First Team, MVC Most-Improved Team and All-MVC Third Team laurels, the only player in The Valley to receive all three of those honors. He was also named a CoSIDA Academic All-District First Team choice.

“Ben has been great,” Lottich said. “If you get him the ball in certain situations, it’s almost automatic. He’ll be playing some 4 and 5 for us. He’ll have an ability to stretch the defense against a traditional 5 and really pound out the opponents when he goes down low against a smaller 4.”

Sophomore Sheldon Edwards (West Palm Beach, Fla. / Palm Beach Lakes [TLAP Sports Academy]) burst onto the scene as a rookie, earning a place on the 2020-21 MVC All-Freshman Team. He appeared in 27 games and made 12 starts during his first collegiate campaign, scoring 8.1 points per game while knocking down a team-most 36 3-pointers and ranking second on the squad with 24 steals.

“Sheldon is actually jumping even higher if you can believe it,” Lottich said. “He was a late bloomer as a basketball player, and he’s continued to get better. He scores the ball in a variety of ways – he can score off the bounce and can raise up and shoot. He’s really locked into defense. He took this offseason and worked, which was great to see.”

Eron Gordon (Indianapolis, Ind. / Cathedral [Seton Hall]) will provide a veteran presence in his sixth year of college basketball. Taking advantage of the extra year of eligibility offered due to the COVID-19 pandemic, Gordon is an elite rebounder at the guard position and pulled down 5.1 caroms per contest a year ago. He also scored 6.8 points per game and shot the 3 at a 33.3 percent clip. He led the team in rebounding on 11 occasions after he did not pace the team in that area in any game the previous season.

“Eron is steady,” Lottich said. “He hits shots when he’s open, he plays off the pick-and-roll well, and he’s one of the best defensive rebounding guards in the country. He’s brought a veteran presence and maturity level. He’s going to be playing on the ball and off the ball a little bit this year. He’s always available to do whatever we need him to do.”

Sophomore Connor Barrett (Chicago, Ill. / Loyola Academy) played in 18 games and made 13 starts as a rookie before missing time with an injury. He ranked second on the team by hitting 3s at a 39.7 percent clip and made three or more 3-pointers on five occasions. Barrett averaged 6.5 points and 2.5 rebounds per game.

“Connor is shooting the ball great,” Lottich said. “He was healthy and playing well, and got a little banged up. It’s nothing too serious, so we should have him back on the court soon.”

Junior Emil Freese-Vilien (Copenhagen, Denmark / Falkonergardens Gynasmium) battled injuries over the course of the 2020-21 season, limiting his action to two games. He appeared in 16 games as a freshman in 2019-20.

Five transfers have joined the program and figure to make a significant impact. One was an all-conference player at Winona State, and the other four have previous experience in the Big Ten Conference.

“The transfers have come with a high basketball IQ,” Lottich said. “They’ve all come from very good programs and have all been really well coached. Three players were a part of a lot of success at Wisconsin. One was coached by Tom Izzo, and one was fantastically well coached at Winona. I think the overall intellect of our guys is really high. They come with some maturity and physicality, and when you combine those things, you’ve got a pretty good basketball player.”

After appearing in 86 games over the last three seasons at Michigan State, senior Thomas Kithier (Macomb, Mich. / Clarkston [Michigan State]) figures to be a high-impact player in the Missouri Valley Conference this season. He made 14 starts during his final season in East Lansing, when he shot at a 65 percent clip, going 26-of-40 from the floor to register the team’s highest field-goal percentage. He was part of a Spartans team that reached the Final Four in 2018-19, shared the Big Ten regular-season crown in 2019-20 and again qualified for the NCAA Tournament in 2020-21.

A sixth-year college player, Trevor Anderson (Stevens Point, Wis. / SPASH [Wisconsin]) spent the last four years at Wisconsin after starting his collegiate career at Green Bay. He played against Valpo during the 2016-17 season, which was Valpo’s final year in the Horizon League. He started and saw 23 minutes of action at the ARC on Jan. 16, 2017, an 80-56 Valpo victory over the Phoenix. The point guard appeared in 60 of Wisconsin’s 62 games over the last two seasons. Anderson finished his high school career with the eighth-most points in the history of the state of Wisconsin and was named Mr. Basketball and Associated Press Player of the Year following his senior season.

Fifth-year Kevion Taylor (Milwaukee / Whitnall [Winona State]) comes to Valpo for his extra season of eligibility after earning a haul of accolades during his four-year career at Winona State, a member of a highly-competitive Division-II conference. He was an all-conference first team choice last season, leading his team in scoring at 20.5 points per game while knocking down a team-high 35 3s in a shortened season. He finished his Winona State career with 1,632 points, cracking the Top 10 in program history in career scoring, and started 73 of his 74 games over his final three seasons in the program. Taylor hit a program-record 109 3-pointers in 2019-20.

Joe Hedstrom (Hopkins, Minn. / Hopkins [Wisconsin]) redshirted his first year of college in 2018-19 before incurring a season-ending injury after six games in 2019-20. He appeared in nine games during his third year on Wisconsin’s campus.

Kobe King (La Crosse, Wis. / La Crosse Central [Wisconsin]) will miss time at the beginning of the season, but will add a high-caliber piece to Valpo’s rotation when he returns to the court. He spent three seasons at Wisconsin, including the 2019-20 season where he started all 19 games he played and averaged 10.0 points per game and a team-high 12.6 points per game over nine Big Ten contests, all starts. He was Wisconsin’s Mr. Basketball, Gatorade Player of the Year and a unanimous selection for Associated Press Player of the Year following his senior year of high school.

The son of a coach, DeAveiro helped his team to three Ontario Scholastic Basketball Association championships and earned 2020 Academy Defensive Player of the Year in his native Canada. Young was named Super 5 Player of the Year by the Oklahoman following his senior season in 2020-2021. Woodyard scored 15.7 points per game as a junior and 16.7 per game as a sophomore at London High School in Ohio. Palesse was named Senior Wing Award Winner by Wisconsin Sports Network as a senior and was named to Team Wisconsin following his senior season. Ruedinger was an Associated Press First Team All-State selection in 2020-21.

“I really like the freshmen a lot,” Lottich said. “They’re very talented. Right now, they’re adjusting to the physicality and speed of the game. They all have moments where you look up and go, ‘Wow.’ We’ve seen flashes. They’re willing to learn and willing to be coached.”

Following the Beacons in Exhibition Action

There will be no ESPN3/+ video coverage of the two home exhibition games, but both will have audio coverage and live stats via StatBroadcast. The audio of the Ashland game will be available on the WVUR YouTube page and WVUR, 95.1 FM Valparaiso and the TuneIn Radio app will join the game in progress at the conclusion of the Valpo football game at San Diego. Garrett Willis will have the call for the Ashland exhibition. The Flagler contest will be on 95.1 FM Valparaiso, The TuneIn Radio App and ValpoAthletics.com with Todd Ickow describing the action.