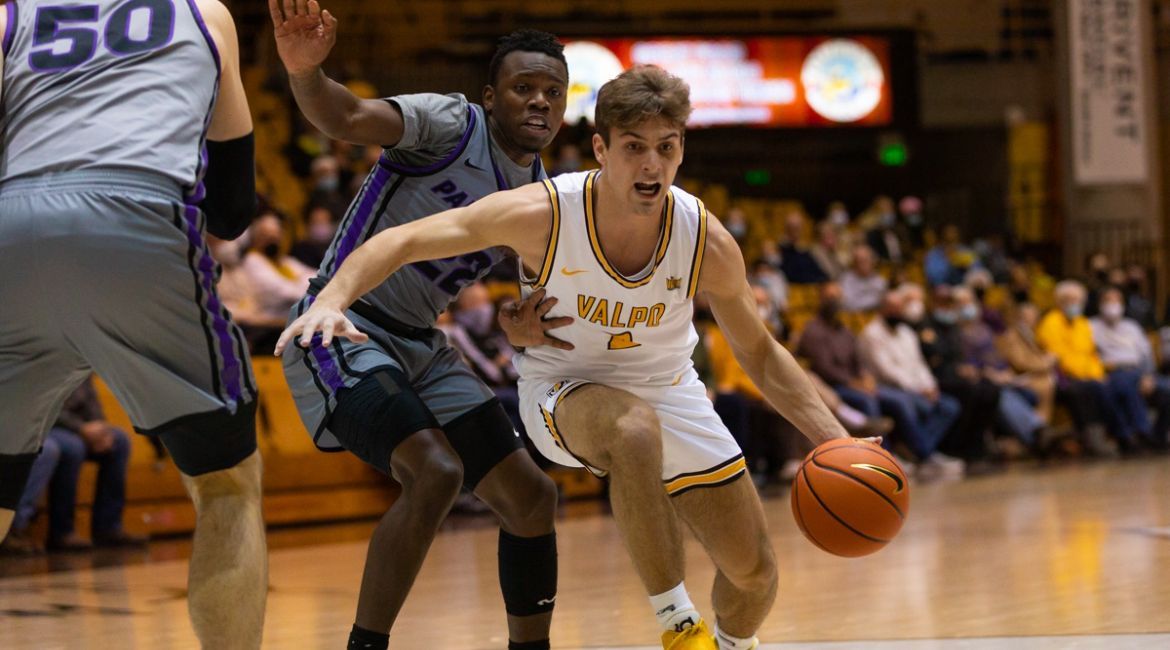 Next Up in Valpo Basketball: After a 2-0 week that featured a pair of thrilling victories decided by a total of five points, the Valparaiso University men’s basketball team will look to stretch its winning streak to three on Wednesday night at the Athletics-Recreation Center. Bradley will be in town for the latest installment of tightly-matched series that has featured four season splits in Valpo’s first four seasons in the Missouri Valley Conference.

Last Time Out: Valpo led by as many as 11 midway through the second half and fended off a late Indiana State surge for a 75-73 victory on Saturday at the Hulman Center in Terre Haute. Ben Krikke’s contested hook shot that spun around the rim and in with six seconds left in regulation stood as the game-winner when Valpo executed to perfection on the final defensive possession, forcing a difficult shot by a defensive-minded player as time expired. Krikke boasted a team-high 21 points, while Kevion Taylor contributed 17 and Kobe King chipped in 15. Krikke recorded Valpo’s latest game-winner since Eron Gordon’s memorable shot to beat Loyola in the 2020 MVC quarterfinals. Valpo held on for the victory despite playing without Trevor Anderson in the second half and without Thomas Kithier over the final 11:46 as both battled injuries. Thanks to winning both the turnover and rebounding battle and strong free-throw shooting, Valpo prevailed despite being outshot for the first time this season (1-6).

Head Coach Matt Lottich: Matt Lottich (93-88) is in his ninth season overall at Valparaiso University and sixth as the head coach of the men’s basketball program in 2021-2022. The 2020-2021 season saw Valpo improve its Arch Madness seeding for the fourth straight year as the program continued to make positive strides in each season as a Missouri Valley Conference member. The team earned a first-round bye in the State Farm MVC Tournament for the first time since joining the prestigious league. Valpo upset previously-undefeated Drake, the nation’s No. 25 team, 74-57 on Feb. 7, 2021 at the ARC, the fourth win over an AP Top 25 team in program history and second under Lottich. The Bulldogs were one of three undefeated teams in the nation prior to that setback, joining Gonzaga and Baylor. Just two years removed from finishing in last place and being knocked out in the first round of the Missouri Valley Conference Tournament as a first-year Valley member, Lottich’s team did more than hold its own in 2019-2020, ascending into a tie for sixth in the league standings before finishing as the conference tournament runner-up. Valpo became the first team in the history of Arch Madness to reach the title game after playing in the opening round. Lottich, hired as the 22nd head coach of the Valpo men’s basketball program in April 2016, graduated from Stanford University in 2004 and New Trier High School (Illinois) in 2000.

Series Notes: Bradley owns a 5-4 edge in games played since Valpo joined the Missouri Valley Conference prior to the 2017-18 season. The two teams have split the regular season series each year and Bradley prevailed in the 2020 MVC title game. The Braves hold a 7-5 advantage in a dozen all-time matchups, a series that dates all the way back to 1980. The home team had won seven straight games between these two foes until Bradley came to the ARC and earned a 76-52 victory on Feb. 10 of last season. Both matchups occurred within the confines of Valpo’s home arena a year ago as the Beacons won 91-85 in double overtime on Jan. 28. Bradley’s February victory was its first ever at Valpo, snapping a five-game skid at the ARC. Furthermore, Bradley head coach Brian Wardle ended a personal 10-game losing streak at the ARC with six of those losses coming during his tenure at Green Bay.

Down But Not Out: When Valpo transformed a 40-35 halftime deficit into a 75-73 victory on Jan. 22 vs. Indiana State, it represented the fifth time this season the Beacons have trailed at the game’s midway mark before rallying to prevail. Half of Valpo’s 10 wins this season have come when trailing at the break. Valpo has faced a five-point halftime deficit in each of its last two games, both eventual victories. In addition to the last two games against UNI and Indiana State, the Beacons also came from down at half to beat Eastern Michigan (Dec. 20), Tulane (Nov. 24) and Jacksonville State (Nov. 22). Valpo also had five wins when trailing at halftime in 2019-20, but if the team notches a sixth win when chasing at the break, that would be the most since rallying from seven halftime disparities during the 2011-2012 campaign.

Century Mark in Sight: Valpo head coach Matt Lottich earned his 93rd career win on Jan. 22 at Indiana State. He needs just seven more to become the fourth head coach in program history to reach 100 career victories, joining Homer Drew, Bryce Drew and J.M Christiansen. Lottich’s victory over the Sycamores elevated him into a tie for fourth in program history with the legendary Gene Bartow (1964-1970). On a side note, Valpo assistant coach Matt Bowen worked under Bartow at UAB in 1995.

Ending Terre Haute Troubles: Valpo had dropped its first three Missouri Valley Conference games at Indiana State prior to notching the 75-73 victory on Jan. 22. Valpo’s previous win in Sycamore territory came 69-63 in a nonconference matchup on Dec. 9, 2015. The team’s first three MVC trips to the house that Larry Bird built resulted in losses by an average margin of 13 points per game.

Reversal of Fortunes: Just two weeks after a 92-65 loss in Cedar Falls, Valpo reversed the result in an 83-80 overtime victory over UNI on Jan. 19. The last time Valpo beat a team that it had lost to by 27 or more earlier in the season was 1953-1954, when head coach Kenneth Suesens’ team beat Western Michigan 63-62 after having loss to WMU 103-70 earlier that year.