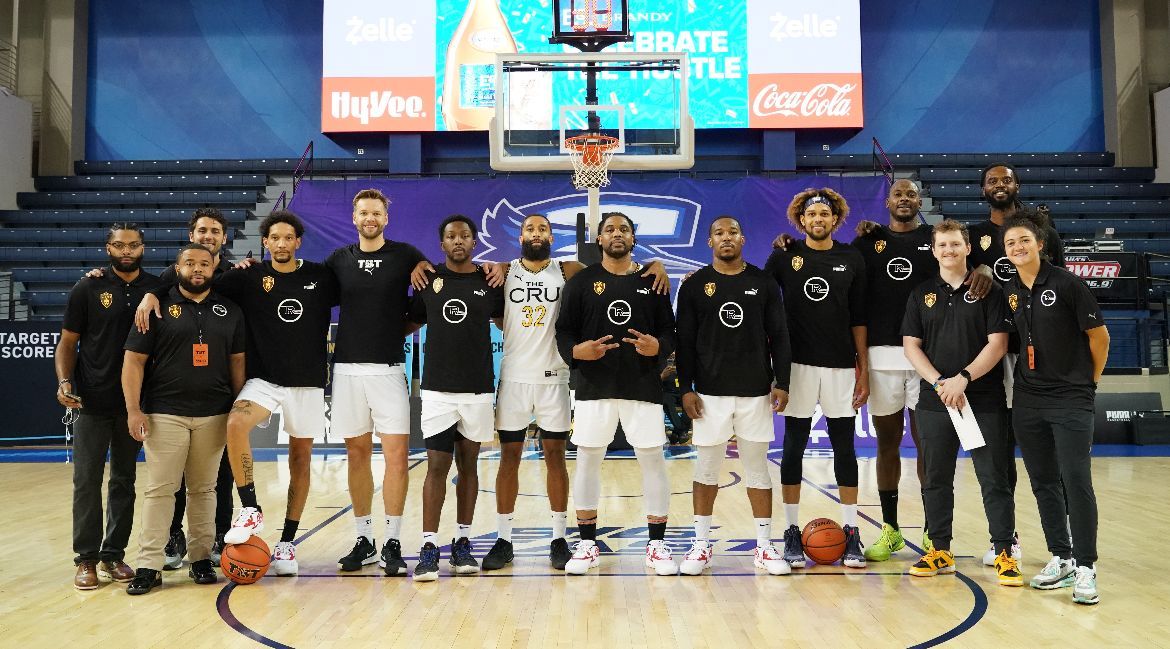 As Jason Karys ‘17, M.S. ‘19 looked around the hotel bar and restaurant area on Saturday night in Omaha, he took a moment to soak up the satisfaction of achieving the primary goal of the Cru, a team comprised of mostly Valpo alumni that competed in the $1 million, winner-take-all summer basketball event known as The Basketball Tournament (TBT).

The eighth-seeded first-year TBT team had just dropped a competitive first-round game 88-78 to the Gutter Cat Gang, yet the moment remained satisfying for Karys, the head coach and general manager of The Cru and a former Valpo student manager, walk-on player, graduate assistant and Director of Operations. He sat surrounded by former Valpo men’s basketball standouts, some of whom played together with the Brown & Gold and others of whom played at different times but bonded through a shared experience of representing Valpo Athletics, Valpo basketball and Valparaiso University.

“It was amazing; it was magical,” Karys said. “It was stressful for our staff of DJ (Darryl Jackson ‘16), Kendall (O’Banner ‘16, M.S. ‘18), Sam (Back), Leah (Earnest) and myself to put it all together. We didn’t know exactly what to expect. The payoff was not even the game we played, but the hangout afterward. Everyone on the team came down and we shared a meal together. That was the point of the whole thing – bringing Valpo alumni together to make those connections. This allows alumni to lean on each other for opportunities and networking and sharing good memories of our time at Valpo. That is what I wanted to get out of the whole experience, and it definitely happened.”

The Cru was led by Brandon Wood’s 25 points, while Cory Johnson poured in 18 and LaVonte Dority added 15. Other former Valpo players to take the court included Keith Carter, Jay Harris and Darien Walker, while the team also featured Ivan Almeida and Derrick Nix.

“All of the players were incredibly grateful, and we heard through the grapevine that three players were getting calls from professional teams overseas inquiring about getting them on their team for the following year,” Karys said. “It gave these players the boost we were looking for as far as providing opportunities. Derrick Nix, a phenomenal leader who played at Michigan State and has great perspective, came out of this saying that he doesn’t want to play for any TBT team other than ours in the future. That means a lot.”

This year’s first-time experience was a building block for the future of the Cru, which put together a solid showing as the No. 8 seed in the Omaha Regional, facing the No. 1 seed and a team comprised of EuroLeague players.

“The night before the game, I talked with our assistant coaches and we had no idea what this was going to look like,” Karys said. “The experience that we had this year really helps us for next year because we all understand how doable it is. We felt competitive throughout the whole game. Brandon Wood was able to let his talent shine. We leaned on Keith Carter to make decisions and create offense for the team. LaVonte Dority really stepped up in a big way and was a rock for us all week with his maturity and defensive intensity. I think knowing what we know now, we’re poised to make a run next year.”