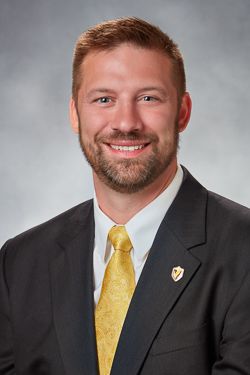 Luke Gore completed his 18th year with the Valpo basketball program and his fourth season in his current role as associate head coach in 2019-2020. Gore has helped guide the team to eight postseason berths in the last 10 years, as well as the three winningest seasons in program history.

In his current role, Gore works with player development with an emphasis on post play. He also leads the staff’s scouting efforts and coordinates the team’s defense. Over his first 18 years, Gore has guided 12 all-conference post players and 13 post players who have gone on to professional basketball careers. Gore is also responsible for the program’s scheduling of future games.

During the 2019-2020 season, Gore’s focus on player development paid dividends in helping two of the team’s five returning players account for 40 percent of the Missouri Valley Conference Most-Improved Team. Javon Freeman-Liberty and Mileek McMillan were two of the five players on the most-improved squad. The season culminated with an unprecedented run to the MVC title game that saw Valpo become the first team in the 30-year history of Arch Madness to reach the final after playing in the opening round.

In Gore’s 17 years on staff, Valpo has made 10 postseason trips, including three NCAA Tournament appearances and four Postseason NIT bids. Over his tenure, the programs has won 352 games, captured seven league regular season titles, and won one Mid-Con and two Horizon League tournament titles. The last 10 years have seen Valpo earn eight postseason berths, highlighted by a 28-win season and an NCAA Tournament appearance in 2014-2015, followed by a school-record 30-win season and a berth in the NIT title game in 2015-2016. In 2016-2017, Gore helped lead the team to a fifth Horizon League regular season title in a six-year span and an at-large bid into the NIT.