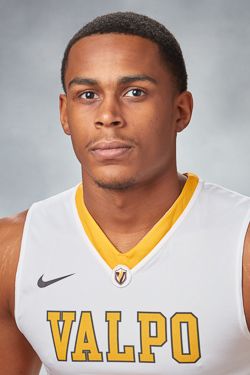 2019-20: Played in 25 games and made 19 starts while missing nine games due to a back injury… Averaged 6.2 points, 3.9 rebounds and 2.2 assists per game… Had six games in double figures in scoring including three with 15+ points… Had three or more assists on eight occasions including three games with seven or more helpers… Had nine games with five or more rebounds including four with seven or more… Led the team in rebounds three times and assists four times… Posted nine points, five rebounds, three assists and three steals in his Valpo debut, a victory over Toledo in the Nov. 5 season opener... Had a season-best 19 points to go along with eight rebounds and went 8-for-8 at the free-throw line on Nov. 12 at SIUE... Topped the team with seven rebounds, four of which occurred on the offensive glass, on Dec. 3 at Eastern Michigan... Boasted six assists and a season-high nine rebounds while scoring 13 points to help Valpo top Central Michigan on Dec. 8...  Had 15 points and seven assists while setting season highs in made field goals (six) and made 3-pointers (three) on Dec. 30 vs. Loyola... Dished out seven assists for the second consecutive game on Jan. 4 at Evansville... Made his first start since Jan. 15 at UNI on Feb. 9 at Loyola and passed out nine assists, matching the most by any Valpo player in 2019-20 and establishing a personal best.

2018-19: Joined the program as a transfer and sat out due to transfer rules... Has two seasons of eligibility remaining starting with the 2019-20 campaign.

Prep: A product of Kenwood Academy in Chicago ... Second Team All-State selection from both the Associated Press and the IBCA as a senior ... led the Broncos to 22 wins in 2015-16, averaging 17 points and nine rebounds per game ... helped Kenwood to its first city championship game as a senior ... led Kenwood to consecutive Public League Red-Central titles in his final two seasons ... a three-star recruit out of high school and a consensus top-10 player in his class in the state of Illinois... Majoring in management... Enjoys reading and taking photos of nature.