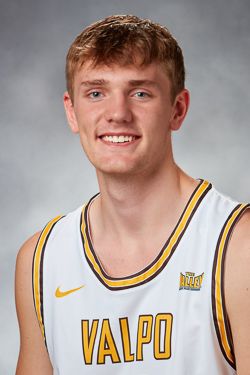 2021-22: Played in seven games, totaling four points and two rebounds... Scored four points in five minutes of action in the Nov. 9 season opener vs. Toledo. He had four shot attempts during the season, all in the opener against the Rockets... After playing in the first two games of the season, was sidelined due to Lyme disease until returning to the court on Feb. 19 at Evansville... Saw action in the final four games of the regular season plus the MVC Tournament opener.

2020-21: Appeared in two games while battling injuries over the course of the season… Made his season debut on Feb. 10 vs. Bradley before also seeing action on Feb. 13 at UNI.

2019-20: Appeared in 16 games and averaged 6.6 minutes per contest while totaling 16 points, four blocked shots, five assists and 15 rebounds (six offensive boards) during his rookie campaign… Made his collegiate debut on his birthday in the Nov. 5 opener vs. Toledo by contributing four points, three rebounds and two assists... Knocked down his first career triple on Nov. 22 vs. Grand Canyon… Had a season-best five points on Nov. 27 vs. Trinity Christian.

Before Valpo: Started playing basketball in November 2014… Played badminton during his younger years… Played for Denmark at both the Under-16 and the U18 FIBA Euro Championships in 2015 and 2017, respectively… Shortly before coming to Valpo, played for Vaerlose in the Danish Basketligaen, the highest professional league in Denmark. Came off the bench for much of the season at age 19, averaging 4.2 points and 2.2 rebounds in 12.3 minutes of action… Averaged 7.8 points and 3.0 rebounds in 18.5 minutes at the 2017 FIBA U18 Championships.

Personal: Majoring in civil engineering... His very first basketball practice came when he had just turned 14. At that time, he was still playing badminton four times per week. Started taking basketball seriously about a year later, when he got asked to a training camp by the U15 national team. Soon after, he began playing basketball exclusively... Has been very interested in drawing for many years. Wanted to become an architect for a long time and still has that dream in the back of his mind... Spends a lot of time drawing blueprints and houses.