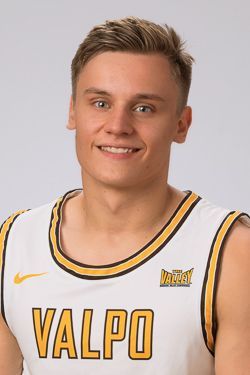 2019-20: Appeared in nine games before having his rookie season cut short by a hip injury… Averaged 2.9 points per contest while shooting a robust 60 percent (6-of-10) from 3-point land in limited action… Made his collegiate debut on Nov. 9 at Saint Louis... Scored his first collegiate basket on Nov. 12 at SIUE, a 3-pointer at the buzzer to end the first half... Set season highs in points (11) and assists (four) while knocking down four of his six shots and canning three 3s on Nov. 27 vs. Trinity Christian.

Before Valpo: Played for Gimle Basketball in the BLNO, Norway’s top professional basketball league… Helped lead Gimle to a league runner-up finish, averaging nearly 20 points and better than four assists per game… Represented Norway internationally three straight years, playing at the 2016 U16 European Championships and the 2017 and 2018 U18 European Championships… Averaged 17.8 points, 4.9 rebounds and 3.9 assists per game for Norway at the U18s in 2018... Was quickly recognized as one of the best players in Norway from a young age... Was able to compete for youth championships starting at age 15.

Personal: Majoring in sport management... Played all kinds of sports as a child. His best three sports were soccer, handball and basketball. There were phases of his life where he wanted to pursue soccer or handball, but eventually figured out that basketball was the most fun sport for him.