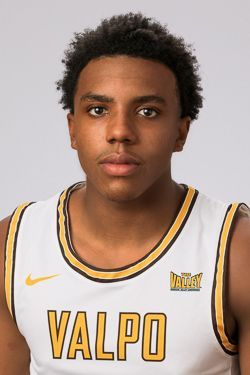 2020-21: Named to the MVC Preseason Second Team... Leading into the season, put a lot of time into his shot, agility and being able to run faster and jump higher.

2019-20: Was one of two Valpo players to compete in all 35 games and made 33 starts during his freshman campaign… Was third on the team in scoring (9.4 ppg) and second in rebounding (4.6 ppg) while leading the team in blocked shots with 36… Earned a place on the MVC All-Freshman Team… Finished seventh in the MVC in blocks per game at 1.0… Scored in double figures on 19 occasions including eight outputs of 15+ points and two of 20+ points… Scored in double figures just once over his first seven games and then did so in 18 of the next 28… Had seven or more rebounds 11 times including 10 times in the final 21 games of the season after doing so just once in the first 14 games… Had multiple blocked shots in 11 contests while dishing out four or more assists in eight instances… Led the team in scoring five times, rebounding 11 times and assists on five occasions… Paced the squad in assists just twice in 31 regular-season games, but did so in three straight outings at the MVC Tournament in St. Louis…. Started conference play sixth on the team at 7.8 points per game, then scored 10.9 points per game in Valley action, third on the squad… Made his collegiate debut and scored his first collegiate basket on Nov. 5 vs. Toledo... Made his first career start in a game near his hometown of Alton, Ill. on Nov. 12 at SIUE, scoring five points and grabbing three boards... Had the first double-figure scoring output of his collegiate career in a win over Grand Canyon on Nov. 22… Scored in double figures in five straight games from Nov. 27 to Dec. 18... Became the first Valpo player since 1998 to go perfect from the field with eight or more field-goal attempts while scoring a team-high 21 points on Dec. 30 vs. Loyola, the first MVC game of his collegiate career... Reached double figures for the seventh time in eight games on Jan. 4 at Evansville, contributing 10 points to go along with a team-high seven rebounds... Established a season best with nine rebounds, including six offensive boards, on Jan. 7 at Southern Illinois... Enjoyed an 18-point, seven-rebound performance on Jan. 11 vs. Drake, leading the team in both areas. He went 7-for-7 at the free-throw line after entering that game just 4-of-13 at the stripe all season... Scored 18 points on Jan. 18 vs. Indiana State, making it three straight conference home games with 18 points or more... Finished with a team-high eight rebounds while notching his fifth multi-block game of the season on Jan. 23 at Missouri State... Scored 13 second-half points to finish with 15 on his birthday on Jan. 29 at Bradley. It was the highest scoring output in a road game in his collegiate career to that point... Had five assists and did not commit a turnover, pacing the team in assists in the Feb. 12 win over Southern Illinois... Reached double figures for the fourth time in seven games by posting 15 points on Feb. 19 at Drake… Led Valpo in scoring with a career-high 22 points on 11-of-17 shooting while also pacing the team with seven rebounds in a Feb. 25 win over Missouri State... Shared the team lead with 11 points while pulling down five rebounds in the Feb. 29 regular-season finale at Indiana State... Named the MVC Newcomer of the Week on March 1 after averaging 16.5 points and 6.0 rebounds over the final two games of the regular season, leading the team in both areas… Scored in double figures in each of the first three games of the MVC Tournament in St. Louis, making it five straight overall of 10+ points… Also had seven or more rebounds in each of the first three MVC Tournament contests and dished out a season-high seven assists in the MVC semifinal upset of Loyola.

Prep: Earned 4A First Team All-State honors from the Illinois Basketball Coaches Association as a senior… Member of the 2019 All-Metro First Team… Was honorable mention all-state by the Associated Press after his senior season… Named the Riverbend Boys Basketball Player of the Year, the Telegraph Large-Schools Boys Basketball Player of the Year and the biggest “sleeper” in the state of Illinois by the Chicago Sun-Times in 2018-19… Was also tabbed the Gallatin Boys Basketball Player of the Year following the 2018-19 season, an award previously won by former Valpo player Deion Lavender in 2014… Led Alton in scoring at 17.8 points per game, rebounding at 5.8 and blocks at 1.0 as a senior… Was second on the team in assists at 1.9 per contest and had 13 games of over 20 points while posting six double-doubles during his senior campaign… Scored a season-high 27 points in a 58-49 loss to East St. Louis… Converted a tip-in at the buzzer to clinch a 59-57 win over Collinsville at home… Helped lead the Redbirds to a 23-11 record, a Chick-fil-A Classic title and a 4A Collinsville Regional championship during the 2018-19 season… Named MVP of the Chick-Fil-A Classic… Shot 37 percent from 3-point range and 73 percent from the foul line… Entered high school as a 6-foot point guard and grew to 6-3 by his junior year before shooting up to 6-7 by graduation… Developed an ability to play the three perimeter positions… Led the Centralia Holiday Tournament in both scoring and rebounding, averaging 19.5 points and 9.0 rebounds over four games while blocking nine shots and going 8-of-17 from beyond the arc... Had a 21-point, 11-rebound performance in a win over Evanston, where he went 10-of-13 from the field… Three-year varsity player… Made a significant leap while playing AAU with the Southwestern Illinois Jets prior to his senior season.