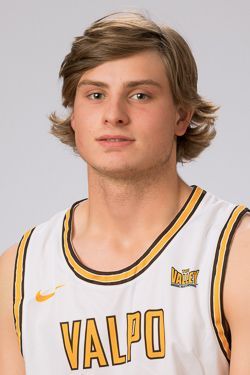 2021-22: Played in 13 games and made one start, averaging 2.1 points per game... Made his lone start of the season on Nov. 17 at Stanford... Scored a season-high nine points and knocked down three 3s on Nov. 22 vs. Jacksonville State in Nassau, The Bahamas.

2020-21: Played in 18 games and made 13 starts as a rookie before missing time with an injury… Scored 6.5 points and pulled down 2.5 rebounds per game while shooting 77.8 percent from the foul line and ranked second on the team by shooting 39.7 percent from beyond the 3-point arc… Scored in double figures six times and made three or more 3-pointers on five occasions… One of three Valpo freshmen to make his collegiate debut on Nov. 27 at Vanderbilt... Accrued his first collegiate points (3), rebounds (3) and assists (2) on Dec. 1 at UIC. His 3-pointer marked Valpo’s lone made triple of the contest.... Knocked down five 3s in the home opener vs. Judson on Dec. 6, becoming the first freshman with five treys in a game since 2013-2014 and the first Valpo player to do so in the first four games of his freshman season since 2006-07... Scored 14 points on Dec. 12 at Central Michigan, his second double-figure scoring output in a three-game span. That effort was highlighted at the foul line, where he went 6-for-6... Had five steals on Jan. 9 vs. Missouri State, joining the short list of Valpo players with five or more steals in a game during the Matt Lottich Era (fifth season): Javon Freeman-Liberty (3), Lexus Williams (3) and Tevonn Walker (2)... Finished with 12 points thanks to four made 3s on Jan. 23 at Illinois State, his fifth double-figure output as a freshman and his fourth game with three or more 3-pointers… Made his final appearance of the season on Feb. 6 vs. Drake before missing the remainder of the season with an ankle injury.