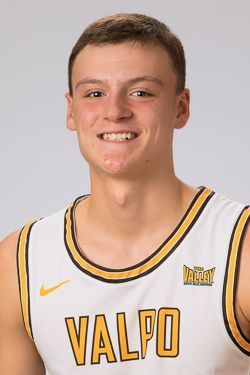 Prep: Named to The Associated Press All-State First Team following his senior season at Sheboygan Lutheran in 2019-20 while also earning Herald Times Player of the Year, All-Big East Conference Player of the Year and Wisconsin Basketball Coaches Association All-State First-Team status… Was a finalist for Wisconsin Mr. Basketball… Led his team to a 27-2 record and the state championship in Wisconsin Division 5 during his junior season in 2018-19 and was on the way to a repeat before the 2019-20 season was cut short due to COVID-19… Became the 38th player in the history of Wisconsin high school basketball to accumulate 2,000 career points, reaching the milestone on Jan. 23, 2020 with a 54-point game against Ozaukee... Needed those 54 points to reach the milestone at home… Led the state in scoring at 39.4 points per game as a senior and finished his prep career with 2,501 points, sixth in the history of the state of Wisconsin… Averaged 16 rebounds per game during his senior season… Had a season low of 24 points as a senior and poured in at least 40 points on 14 occasions including three 50-point showings… Became just the third player in the history of Wisconsin High School basketball to score more than 1,000 points in a single season, finishing his senior year with 1,024 and would have likely set the state’s single-season record if it weren’t for the COVID-19 shutdown... Shattered the Sheboygan Lutheran scoring record that was previously held by Sam Dekker, who played in the NBA from 2015-2019 with the Houston Rockets, Los Angeles Clippers, Cleveland Cavaliers and Washington Wizards… Averaged 30.2 points, 15.7 rebounds and 1.9 blocks per game while shooting 69 percent from the field, 32 percent from 3 and 83.5 percent from the free-throw line during his junior campaign… Was 5-10 in eighth grade and finished high school at 6-8. Shot up to 6-2 as a freshman and 6-5 as a sophomore… Played AAU for the Wisconsin Playground Warriors... High school coach Nick Verhagen said Ognacevic's work ethic was unlike anyone he'd ever seen except for Sam Dekker. "Valparaiso has a special player."

Personal: Majoring in business… Son of Brian and Shannon Ognacevic… Has two younger sisters, Maddie and Katherine… Is a big fan of mixed martial arts and roots for all Boston professional sports teams.