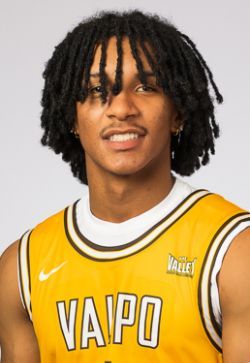 2021-22: Played in 29 games and made three starts during his freshman season... Averaged 1.8 points, 2.0 rebounds and 1.7 assists per game... Dished out 50 assists against just 24 turnovers... Finished the season as one of two freshmen nationally (joining Youngstown State’s Luke Chicone) with 50 or more assists and fewer than 25 turnovers and was the only player in the MVC to achieve that feat... Ranked second in the MVC in assist to turnover ratio at 2.1... Collected a season-high six rebounds on Nov. 27 vs. Trinity Christian... Distributed a season-high eight assists on Dec. 7 vs. East-West... Scored a season-high eight points on 3-of-5 shooting on Jan. 15 vs. Missouri State... Made his first collegiate start on Feb. 21 vs. Evansville and started the final three games of the regular season... Did not play in the MVC Tournament due to a thumb injury suffered in the Feb. 26 regular-season finale at Bradley.

Before Valpo: Helped his team to Ontario Scholastic Basketball Association (OSBA) championships in 2018, 2019 and 2020 and earned 2020 Academy Defensive Player of the Year… Received First Team All-State status at the 2019 Canadian National Championships while leading his team to a silver medal… Was a multi-year Team Ontario captain and earned a place in the 2019 U19 Junior National Team Camp… Led the OSBA in assists and steals in 2019… In 2018, earned a bronze medal at the Canadian National Championships after garnering a gold medal at the event in 2017… A 2018 Biosteel Future All-Canadian game selection… Member of the 2015-2016 Canada Basketball Junior Academy… Averaged 7.2 points and 5.4 assists while shooting 41.9 percent from the 3-point line for Orangeville Prep as a junior… Did not play games during his senior season as games were not held in Canada during the COVID-19 pandemic… Served as a team captain during his senior season… Played for Team Canada during the U19 world cup in Canada during the 2021 summer.

Personal: Father David is the former head coach at McGill University in Montreal and has a long-standing relationship with the Valpo coaching staff… Was teammates with Ben Krikke on the Canadian national team… Is an avid football fan… Also played soccer until his freshman year of high school, when he gave up the sport to focus on basketball… Played on the state team for soccer at age 13. He traveled significantly for the sport, including a trip to England… Enjoys golf, tennis and numerous other sports.