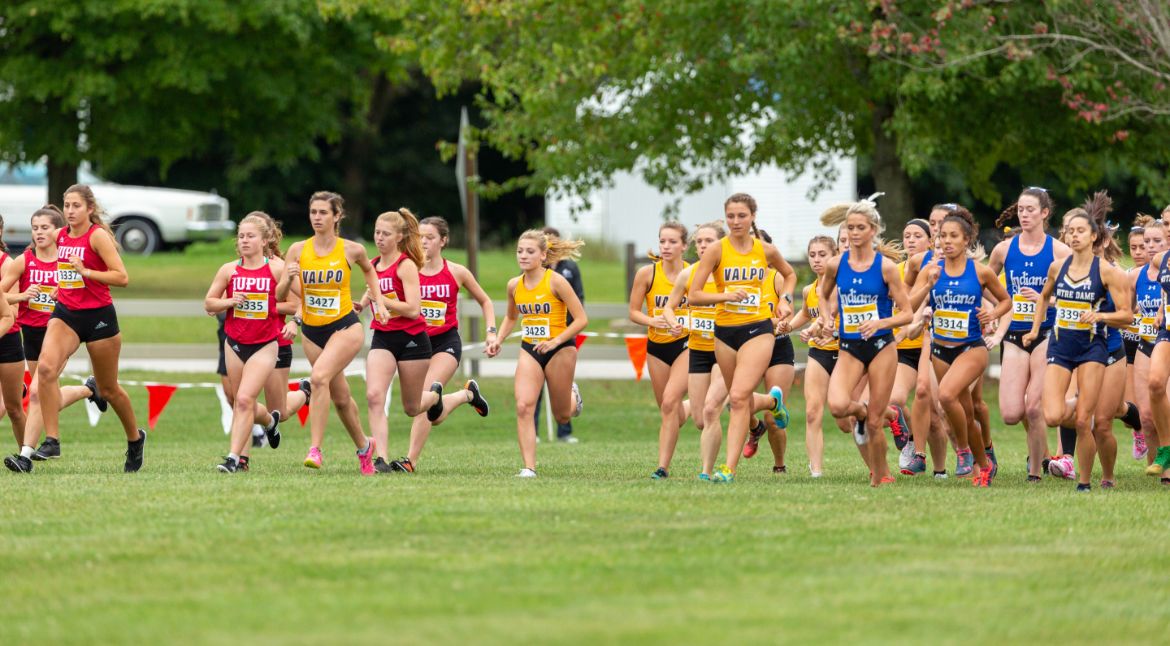 After Valparaiso University hosted its first championship event as a member of the Missouri Valley Conference with women’s golf last spring, it’s time for cross country to take center stage with the 2019 MVC Championships coming soon to Northwest Indiana.

The multi-purpose park is a hub of activity in Northwest Indiana and is also home to numerous postseason meets and conference championship events for Indiana high school runners each year. The park began as a fully functional farm, purchased by Colonel Robert Heffron Murray and his wife Sue in 1934. The original property consisted of 80 acres. During its most productive period, it produced 400 gallons of milk per day.

The property grew to its current size of 238 acres in 1972. When Colonel Murray passed away, he donated the land to Porter County.

Following the Meet
The meet will be carried on ESPN3 with Brad Wells (play-by-play) and Mike Mahon (analyst) on the call. Unofficial live results will be available with the link posted on ValpoAthletics.com, and official PDF results will be posted following the protest window.

Regionally Ranked
For the first time in program history, the Valpo men’s cross country team cracked the regional rankings on Monday, Oct. 21. The team checked in at No. 15 in the U.S. Track & Field Cross Country Coaches Association Great Lakes Regional poll. Six of the 15 teams in the poll are Big Ten Conference members, one is in the ACC, two are in the Big East and three are in the Mid-American Conference. The only other teams in the Great Lakes Top 15 as of Oct. 21 are Youngstown State (Horizon League) and Valpo (Missouri Valley Conference).

The Alexander Bruno File
Fifth-year senior Alexander Bruno has already solidified his status as the best runner in program history, as he owns both the 8K and 10K program records. His top 8K time of 24:23 came on Oct. 27, 2018 at the MVC Championship in Peoria, Ill., while his school-record 10K time of 31:54.4 came on Nov. 9, 2018 at the NCAA Regional. In both instances, he shattered Aaron Crague’s program marks that had stood since 2001.

The fifth-year senior enters the conference championship coming off his top time of the season at the Bradley Pink Classic on Oct. 18, a 24:45.2 in the 8K, better than any time in program history in that event by those not named Alexander Bruno.

The Bloomington, Ill. native and University High School product was preceded at Valpo by his older brother Adam, who graduated in 2017 after competing in both track & field and cross country.

Others Climbing Career Charts
Several other Valpo individuals have cracked the program record book this season. Dominic Paoletti made his way on to the program’s all-time leaderboard in his most recent meet, finishing in 25:07 in the 8K at the Bradley Pink Classic on Oct. 18, the fifth-fastest time in program history and the fastest by someone other than Bruno since 2001.

On the women’s side, Alaina Carpenter ran the eighth-fastest 6K time in school history, posting a 22:39.7 at the Bradley Pink Classic. Katherine Germann led the team in the meet with a 22:31.3, improving her top time, which remained the sixth-fastest in program history.

Hosting Success
The last time the Valpo men finished in the top five in the team standings at a conference meet was 2007, coinciding with the year the program hosted the Horizon League Championships at Sunset Hill Farm County Park. This year’s team could be in position to repeat that high finish when hosting the conference finals.

Head Coach Mike Straubel
The second-longest tenured active head coach at Valparaiso University, Mike Straubel is in his 33rd season guiding the men’s and women’s cross country programs. He is second among active Valpo coaches behind only 35th-year men’s tennis coach Jim Daugherty. Straubel started teaching on campus in 1985 and became the head coach of the cross country program in 1987. He earned his master’s degree in 1979 from Western Michigan, picked up his J.D. from Marquette Law School in 1982 and earned a LL.M. degree from McGill in 1987. He ran collegiately at both Marquette and McGill. He also serves as the distance coach for the Valpo men’s and women’s track & field programs. Straubel has coached 45 all-league honorees in his time guiding the cross country squads.

219 Tracker
The only athlete on any Missouri Valley Conference cross country roster that hails from Northwest Indiana is Moriah McCormick of Indiana State, a Highland High School alum and a native of Highland, Ind.

On Deck
Valpo will compete in the NCAA Great Lakes Regional in Madison, Wis. on Friday, Nov. 15.