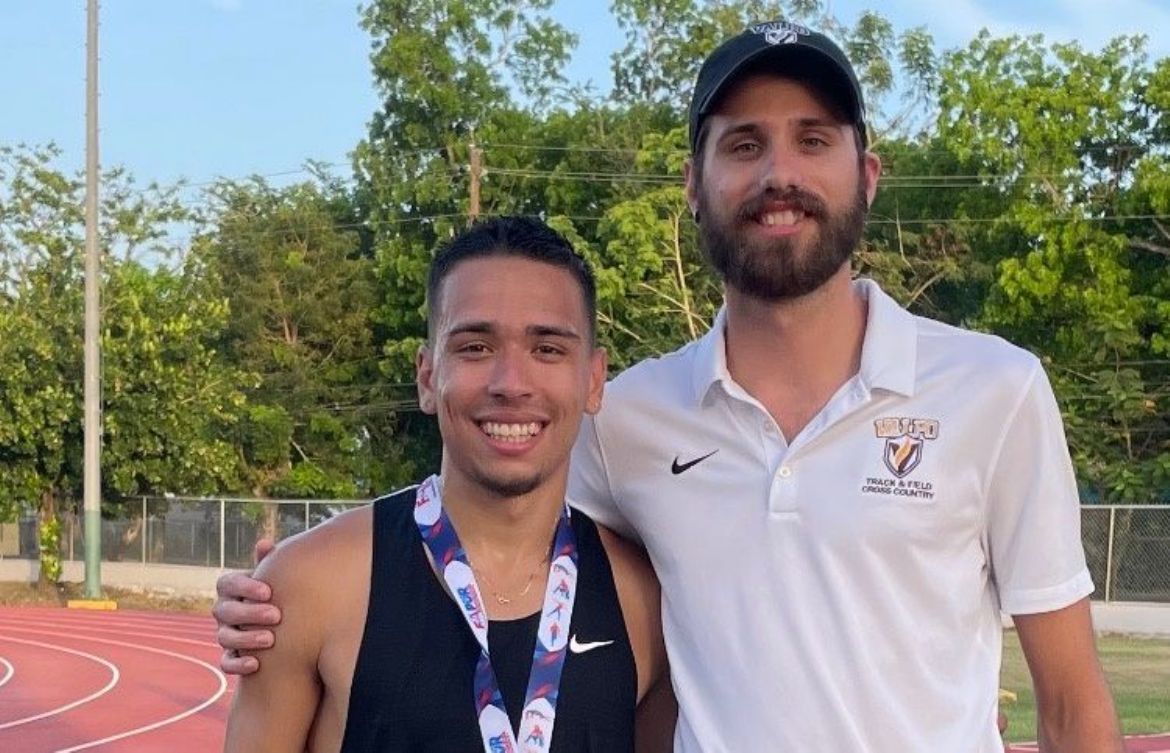 Not only did Ignacio Veloz Bonilla (San Juan, P.R. / American Military Academy) represent Valparaiso University in his native San Juan this weekend, but he did so with a career-best performance.

“I’m going to be honest, before the race started, I was nervous,” Veloz Bonilla said. “Not because I didn’t feel ready, but because I had high expectations for myself that I wanted to achieve. Once the gun went off and the race was underway, those nerves vanished and as a good friend told me, I decided to relax, settle in the pack and trust the training Coach Walker has given me for the past month. So, I settled in the lead pack throughout the race, answering every move they made. I was honestly feeling really good, and my confidence kept increasing with each stride as we were approaching the final lap. Once the bell lap came, I moved into first place in the first curve unconsciously. I say unconsciously because I wasn’t really thinking about it, it just happened. I was feeling good and put on a surge and dragged the pack with me. It wasn’t on the race plan, I wanted to wait to make that move until the last 200mts and use my kick at the end, but it was one of those things I couldn’t control at the moment. I felt good and decided to risk it. Which I don’t know, maybe it cost me, or maybe it didn’t, as I got passed with 150mts left, but the risk I took propelled me to a big PR and a third-place finish.”

Veloz Bonilla hopes to build on his experience competing in San Juan as he returns for his fifth and final year in Valpo’s distance program beginning this fall.

“I am more than happy with those results, as I know now that next year I can achieve some big things,” Veloz Bonilla said. “Coach Walker has been of huge help to me since he got to Valpo, and we have made a really good coach/athlete connection, and I think that next year a lot of good times and races are going to come out of his training. I’m really excited for what’s to come, and grateful to Valpo for the constant support. It was truly amazing to receive so many texts from my classmates and teammates wishing me good luck, as they’ve all become my second family. Now, the plan is to take a week off, and then get back at it as I start my training for cross country in the fall.”

Head cross country coach Vince Walker made the trip to San Juan to coach and support Veloz Bonilla during the event.

“Ignacio really put on a show for the home crowd,” Walker said. “It’s always exciting to race well in front of family and friends back home. I was really proud to see him race with more confidence and be able to trust himself to make the moves he needed to stay in the race. Not only did Ignacio excel at representing his country, he’s also bringing some hardware back to Valpo. Seeing him finish his season with third at the Puerto Rico National Championships is icing on the cake. We both know there is a lot more in the tank and I am excited to see what next year has to bring. He has some big goals for his last year and I believe he can shatter his own expectations. With 400m to go, he made a big move to go for the win and just fell short in the final straightaway. As a coach I would much rather see an athlete make a big move and give themselves a chance to win and have the wheels fall off in the final straightaway then have them run nervously and finish wishing they went for it. Overall, it was a great day. We learned a lot from the race and know what we need to work on for next season.”