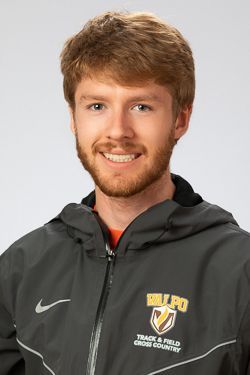 2020 (Track & Field): Started his season by finishing second in the 3000-meter run, running a time of 8:26.94 on the GVSU Bill Clinger Classic on Jan. 17. The time is the third-fastest 3000 in Valpo’s history… Finished second in the mile run on Jan. 24 at Indiana State’s John Gartland Invitational with a time of 4:18.00… On Feb. 15, traveled to Boston University for the David Hemery Invitational, where he finished the 5000-meter run with a program record-breaking time of 14:43.69.

2018 (Cross Country): Ran in every event as a redshirt freshman with Valparaiso…Opened his season with a second-place team finish and a 19:18.3 time at the Crusader Open…Went on to post his top 8K performance of the year at the Greater Louisville Classic, where he placed third on the team in 25:37.5… Competed in the NCAA Great Lakes Regional, where he finished fourth on the Valpo squad in 34:08.1.

2017 (Cross Country): Did not see any action during rookie campaign for the Crusaders.