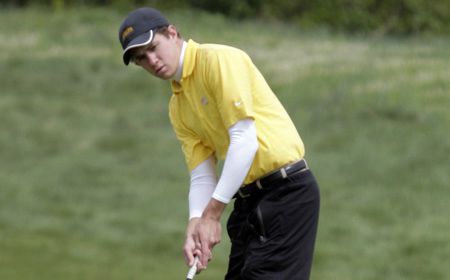 Valparaiso’s men’s golf team turned in a solid first round on Saturday at the Fossum Invitational held at the Forest Akers Golf Course in East Lansing, Mich., placing seventh out of 15 teams.  The Crusaders had moved into a tie for third early in round two when play was suspended for the day due to heavy rains.

Play will resume with the completion of the second round on Sunday morning beginning at 8 a.m. CDT, with the tournament being reduced to a 36-hole event.

Valpo shot 310 as a team in the opening round, and was just five shots out of second place.  Michigan State, the tournament host, led the way with a six-over par 294 on the 7,013-yard, par-72 layout.  The Crusaders started strong in round two, and were just one-over par with players having finished two to four holes thus far, and moved into a tie with Dayton, just four shots behind second place James Madison.

“This is the best we have looked after day one since we began the program last year,” head coach Mike Higdon said.  “We have to try and close this out tomorrow.  We are looking for a top-five finish and we have put ourselves in a position to do it.”

Freshmen Kyle Henning (Brookfield, Wis./East H.S.) led the way for the Brown and Gold in round one with a three-over par 75 and was tied for ninth overall.  Classmate Thomas Wettstein (Neenah, Wis./Xavier H.S.) also had a solid collegiate debut, shooting a 77.

“It was good to see our freshmen step up,” Higdon added.  “Kyle led the way for us and Thomas was tied for second on the team.”

Wettstein tied with Josh Kalita (Chesterton, Ind./Chesterton H.S.) who also carded a 77 in round one.  The duo was tied for 26th overall.  Brad Winters (Elgin, Ill./Saint Edward H.S.) rounded out the scorers for the Crusaders shooting an opening round 81.

Individually, five players shot 73 in round one to lead the way overall.