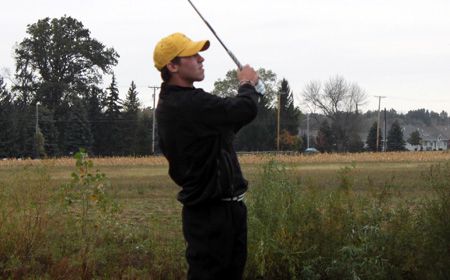 After posting a team school record in the first round of the Butler Fall Invitational on Monday, the Crusaders battled through round two to finish the day in fourth place overall heading into the final 18 holes at Eagle Creek Golf Course in Indianapolis, Ind.

Valpo shot four-over par 288 over the opening 18 holes, bettering the school mark set one day prior on the same course in a triangular meet against Green Bay and Chicago State.  The Crusaders shot 302 in round two on Monday, finishing the day at 590, one stroke ahead of Green Bay and Cornerstone.  Evansville leads the way at 10-under par 558 followed by Butler and IUPUI, both at 575.

Brad Winters (Elgin, Ill./Saint Edward H.S.) led the way for the Brown and Gold and is tied for 10th overall at two-over 144.  He carded a collegiate-best 69 in the opening round before following it up with a 75.  Thomas Wettstein (Neenah, Wis./Xavier H.S.) also shot 69 in round one, giving the Crusaders two sub-par rounds for the first time since the program restarted before the 2009 campaign.  Wettstien finished the day at 151.

"The guy's did great this morning with setting the school record again," head coach Mike Higdon said.  On top of that, we had two golfers in Brad and Thomas shoot under par in the same round.  We had the momentum, but couldn't carry
that into the afternoon round."

"I have asked the team to not get down on themselves and stay positive," Higdon added.  "I am looking forward to them do that and come out hot in tomorrow's round.  We can make a big statement as a program coming out tomorrow with another low round like this morning."

Evansville’s Michael Sainz enters Tuesday with a six shot lead at 10-under par 132 after a pair of 66s on day one.

Valparaiso will return to the links on Tuesday morning for the final round with a shotgun start at 7:30 a.m. CDT.