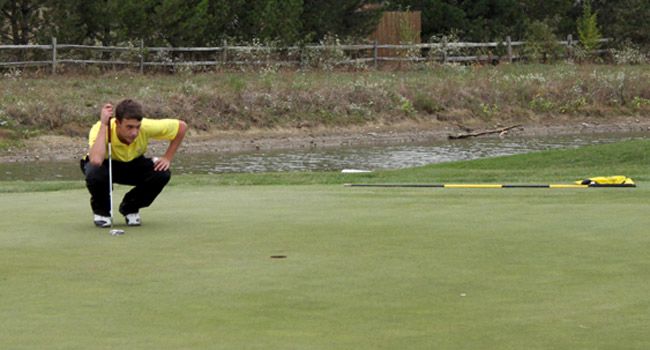 Thomas Wettstein fired an even par round of 72 on Monday. (Valpo Sports Media Relations)
Related Links

Valparaiso’s men’s golf team returned to the course for the first time during the 2011 spring season on Monday and currently sits in 11th place midway through the Butler Spring Invitational held at Prestwick Country Club in Avon, Ind.  Thomas Wettstein (Neenah, Wis./Xavier H.S.) led the way for the Crusaders with an even par round of 72, and is tied for fifth individually.

As a team Valpo carded a 311 over the opening 18 holes on the 6,960-yard, par-72 layout.  The Crusaders are just four shots out of seventh place.  Valpo is two strokes behind Butler and one shot behind Evansville entering Tuesday’s final round.

“We didn’t shoot ourselves out of a good finish,” head coach Mike Higdon said.  “With a good round tomorrow we believe we can move up a few spots.

Purdue leads the way with an even par total of 288, seven shots ahead of Dayton and Loyola (Chicago).

Wettstein is just two strokes out of second place heading into the final 18 holes.  William Sjaichudin of Purdue leads the way at the halfway point after shooting six-under par 66 on Monday.

“Thomas played well,” Higdon said.  “It was nice to see him play consistent all day and make a couple of birdies.”

Andy Webb (Bedford, Ind./North Lawrence H.S.) was five strokes behind Wettstein as Valpo’s second best finisher of the day with his 77.

“Andy had a rough start and didn’t finish particularly well, but had a really good middle of his round,” Higdon added.

Valparaiso will return to the links on Tuesday morning for the final round of the Butler Spring Invitational.  The shotgun start begins at 9:30 a.m. CDT.