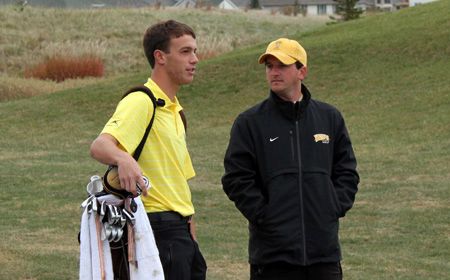 Valparaiso’s men’s golf team finished in a tie for 11th place at the UK Bluegrass Invitational on Sunday at the University Club of Kentucky’s Big Blue Course in Lexington, Ky.  The Crusaders shot rounds of 301 and 315 over the final 36 holes to finish at 908.

The Crusaders finished in a tie with Morehead State, one stroke behind 10th place Eastern Kentucky.  Auburn won the team title at 868 (287-292-289), six shots ahead of Kentucky.

Thomas Wettstein (Neenah, Wis./Xavier H.S.) led the way for the Brown and Gold finishing in a tie for seventh place with a five-over par total of 218.  He fired a two-under 69 on the 7,013-yard, par-71 layout in round two before finishing with a final round 76.  For the freshman, the tournament total marked a career low.

Valparaiso will return to action on Saturday afternoon with the first 36 holes of the Earl Yestingsmeier Invitational in Muncie, Ind.