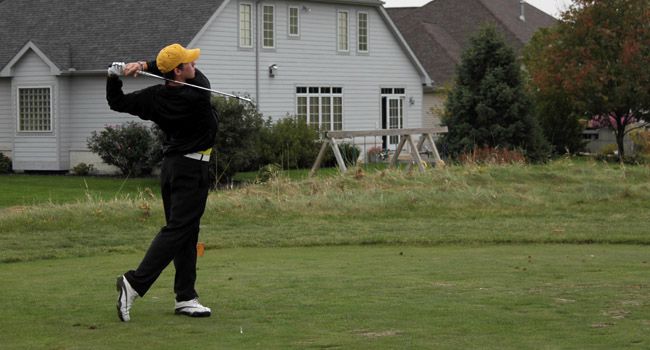 Valparaiso shot rounds of 380 and 406 on the first day of the Earl Yestingsmeier Invitational on Saturday, and currently sits in 15th place entering the final 18 holes at Delaware Country Club in Muncie, Ind.

The Crusaders were tied for ninth after the opening 18 holes on Saturday, but slipped in the overall standing over the second round.  Valpo is two strokes behind Butler entering Sunday’s play.  Ball State leads the team standings by 19 shots over Northern Illinois and Bowling Green after posting 726 (354-372) on day one.

Thomas Wettstein (Neenah, Wis./Xavier H.S.) carded an opening round 78 before shooting 83 in round two and finished at 161 while Andrew Beischel (Whitefish Bay, Wis./Whitefish Bay H.S.) posted rounds of 83 and 88 to finish at 171 in a tournament in which each school played six golfers, with the top five in each round counting towards the team score.

Ball State’s Eric Steger leads the way at one under par 139 (67-72) through 36 holes, and has a three shot lead over teammate Tyler Merkel for medalist honors.

The third and final round of action begins on Sunday morning at 8 a.m. CDT with a shotgun start.