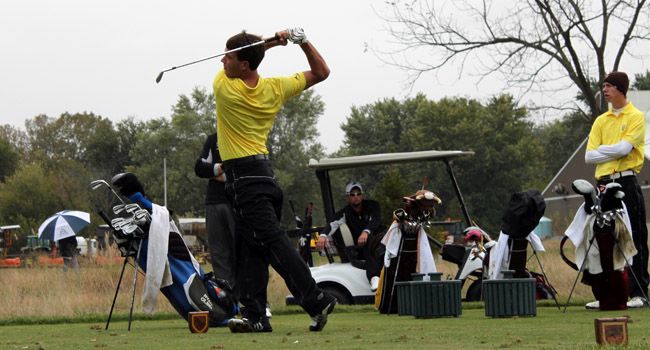 Thomas Wettstein is second overall at even par 140 through two rounds.
Related Links

Three Valparaiso golfers are currently in the top seven of the individual standings through two rounds of the Butler Fall Invitational being held at Highland Golf and Country Club in Indianapolis, Ind.  The impressive 36-hole play by the Crusaders on Monday has the Brown and Gold in third place heading into Tuesday’s final round.

As a team Valpo posted rounds of 290 and 285 for a 36-hole total of 575, trailing just the host Bulldogs (565) and Evansville (568) heading into the final round.  The Crusaders have a one stroke advantage over IUPUI.

Thomas Wettstein (Neenah, Wis./Xavier H.S.) is tied for second at even par 140 after carding rounds of 71 and 69.  The 69 matched his collegiate best.  He trails Butler’s Andrew Wegeng by two strokes heading into the final round after the Bulldog shot rounds of 73 and 65 to finish at 138.

Valparaiso will return to the links on Tuesday morning for the final round with play beginning at 8 a.m. CDT.