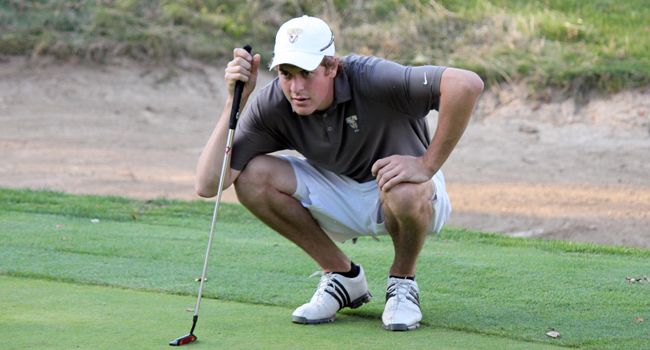 Austin Gaugert was one of three Crusaders to shoot 76 on Monday.
Related Links

Valparaiso’s men’s golf team is in 13th place after the opening round of the U of Dayton Fall Invitational at the NCR Country Club North Course in Kettering, Ohio.  The Crusaders shot an opening round 316 and are just seventh shots out of seventh place in a bunched field.

“This is a terrific course that has four majors over time,” head coach David Gring said afterwards.  “It’s the toughest course we’ve seen yet this year and is a real test.  The greens are very fast and you have to hit the ball straight.”

IUPUI leads the team standings after carding a nine-over par 293 in round one, and holds a one shot advantage over the host Flyers.  Valpo is shots behind Robert Morris (Pa.) for 12th place and four in back of Butler, Detroit, and Malone for ninth.

Austin Gaugert (Lake Geneva, Wis./Badger H.S.) and Brad Winters (Elgin, Ill./Saint Edward H.S.) both carded opening round 76s on the 7,055-yard, par-71 layout in round one to lead the team scoring.  Andy Webb (Bedford, Ind./North Lawrence H.S.) also carded a 76 playing as an individual for the Brown and Gold.

Five players share the individual lead after shooting even par rounds of 71.

Valparaiso will wrap up the fall slate on Tuesday morning with the final round of tournament play in Kettering.  The shotgun start begins at 8 a.m. CDT.