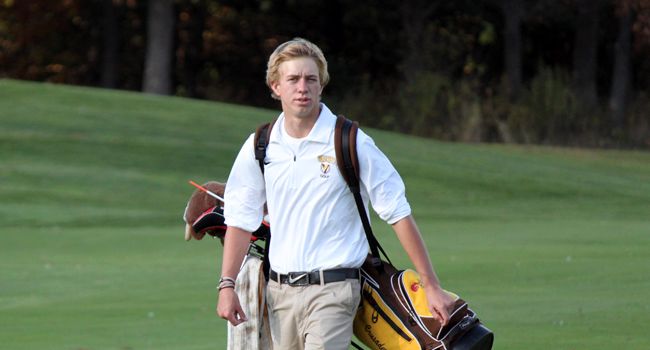 Kyle Henning shot an opening round 75 for the Crusaders on Monday.
Related Links

Valparaiso opened the spring portion of its golf schedule on Monday at the Butler Spring Invitational, and currently sits in fourth place, just two strokes out of second, after the opening 18 holes of play at Prestwick Country Club in Avon, Ind.

The Crusaders fired a first round 301 and are just two shots behind tournament host Butler for second place while Cleveland State is third, just one stroke ahead of the Brown and Gold.  Dayton leads the way after carding an opening round 289.

“For our first competitive round of the spring, I was proud of the guys and the effort that they put out there today,” head coach Dave Gring said after the round.  “We had a tough last few holes for the round from each of our guys, but we are in a good position to finish favorably in the tournament.  We had an excellent balance of scores from all seven players, and we are excited to play the second round tomorrow.”

Valparaiso will return to the links on Tuesday morning to wrap up play in the 36-hole event.  Play will begin at 8 a.m. CDT.