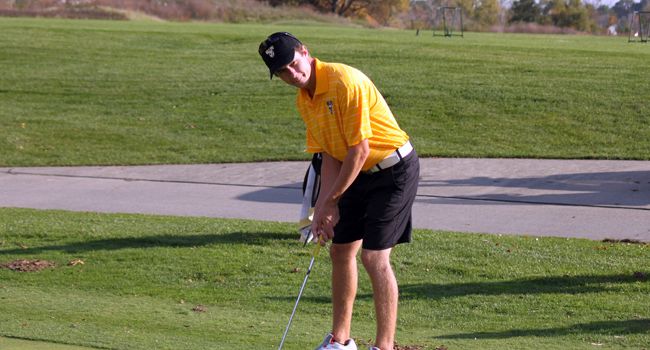 Josh Kalita turned in the team's second best round of the day on Tuesday, a 76.
Related Links

Valparaiso concluded play at the Beu Mussatto Invitational on Tuesday morning with a 10th place finish with a 929 total at the Harry Mussatto Golf Course in Macomb, Ill.

The Crusaders posted their best round of the tournament, 303, over the final 18 holes, led by Kyle Henning’s Brookfield, Wis./East H.S.) even par round of 72.  Henning finished the tournament tied for 18th place overall at 224 over the 6,862-yard, par-72 layout.

Brad Winters (Elgin, Ill./Saint Edward H.S.) added a 77 to finish second for the team with a 235 total.  His total was matched by Joe Harris (Washington, Iowa/Washington H.S.), who, playing as an individual, fired a final round 78.

Austin Gaugert (Lake Geneva, Wis./Badger H.S.) and Thomas Wettstein (Neenah, Wis./Xavier H.S.) each finished the tournament at 237 after shooting rounds of 78 and 80 respectively on Tuesday.  Josh Kalita (Chesterton, Ind./Chesterton H.S.) rounded out the Crusader lineup with a final round 76 to finish at 248 for the event.

Indian Hills Country Club won the team title by 18 strokes with an 873 total while Indiana’s Michael  McGee was the individual champion at four-under par 212 (74-71-67).

Valparaiso will return to action April 14-15 at the Wolfpack Spring Open hosted by North Carolina State in Raleigh, N.C.