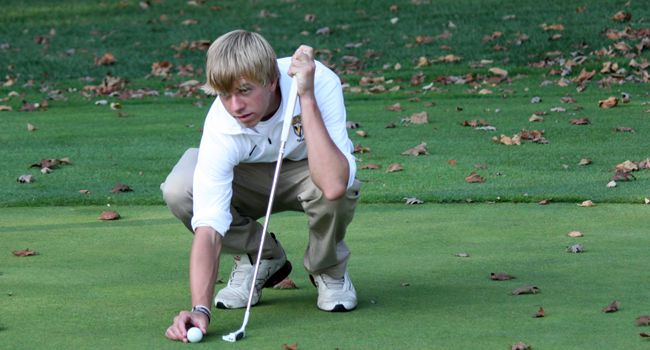 Kyle Henning is one shot off the lead after round one.
Related Links

Kyle Henning (Brookfield, Wis./East H.S.) fired an opening round 73 and is in second place, one shot out of the lead, helping Valparaiso to a tie for third place in the team standings at the Horizon League Championship at Mission Inn Golf and Tennis Resort held in Howey-in-the-Hills, Fla.

Henning carded five birdies on the 6,846-yard, par-72 layout, and trails Michael Nedoszytko of Detroit after the first day of play.

"Kyle had a solid, steady opening round," head coach David Gring said afterwards.  "He played smart and hit a lot of greens in regulation."

As a team, the Crusaders posted a team total of 304 and is tied with Cleveland State for third, just three shots behind tournament leader Green Bay and one stroke behind second place Detroit.  Loyola (Chicago) is fifth, 10 shots behind Valpo while Butler and Youngstown State are tied for sixth with a 315 total.  Wright State is eighth after shooting 318 in round one.

"I was very pleased with the guys today," Gring stated.  "We had a good, solid performance and did exactly what we wanted to do.  We needed a good, solid opening round and we did that."

Brad Winters (Elgin, Ill./Saint Edward H.S.) and Austin Gaugert (Lake Geneva, Wis./Badger H.S.) each added 76s in the opening round for the Crusaders.  Winters finished one-under par over the final five holes while Gaugert was three-under over the same stretch.  The pair are tied for 11th place overall.

"Our back nine as a team was just fabulous today," Gring added.

Thomas Wettstein (Neenah, Wis./Neenah H.S.), who opened his round with an eagle three, finished with a 79 while Andy Webb (Bedford, Ind./North Lawrence H.S.) carded an 80.

Valparaiso will return to the links on Saturday morning for round two of the 54-hole championship.  Play begins at 6:30 a.m. CDT with the Crusaders teeing off starting at 7:30 a.m.