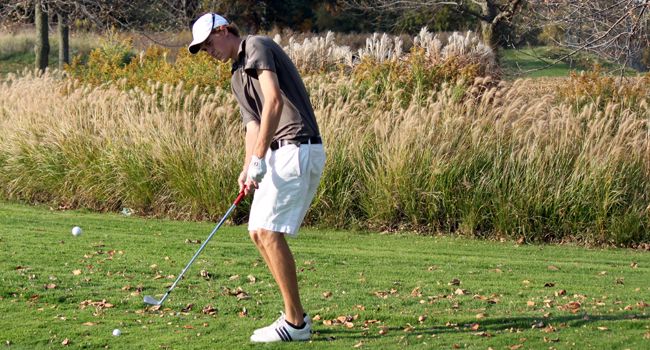 Austin Gaugert led Valpo on Saturday with a 76.
Related Links

Kyle Henning (Brookfield, Wis./East H.S.) remains in a tie for second place individually at the Horizon League Golf Championships following Saturday’s second round but Valparaiso fell back to fifth place as a team following 36 holes of play at the Mission Inn Golf and Tennis Resort in Howey-in-the-Hills, Fla.

The Crusaders turned in a team round of 310 on day two, but remains just nine strokes out of the lead held by Loyola (Chicago). The Ramblers fired a second round 291 and is at 605 for 36 holes.  Green Bay is second at 607 while Detroit is third at 610.  Cleveland State is three strokes ahead of the Crusaders at 611 while Butler is sixth, four back of Valpo at 618.  Wright State (625) and Youngstown State (629) round out the field.

“We definitely struggled more today than yesterday in terms of scoring,” head coach David Gring said after the round.  “We didn’t have nearly as many birdies as in round one and were not as sharp on the greens and putting as we were yesterday.”

Austin Gaugert (Lake Geneva, Wis./Badger H.S.) carded Valpo’s low round of the day, a 76, and is tied for ninth at 152.   The junior was one-under par for his final six holes of the day en route to matching his round one score.  Thomas Wettstein (Neenah, Wis./Xavier H.S.) improved by two shots over round one and posted a 77 on Saturday, and is at 156 two-thirds of the way through the tournament.  The sophomore had three birdies on his card in round two.

Brad Winters (Elgin, Ill./Saint Edward H.S.) is one stroke behind Wettstein overall at 157 after shooting 81 in round two, but finished on a high note with a birdie on the 18th hole.  Andy Webb (Bedford, Ind./North Lawrence H.S.) matched his opening round 80 with an identical score on Saturday, and is at 160 heading into Sunday’s final round.

“We still have some battling to do but it is still within reach,” Gring concluded.  “Nine shots is not out of the question to make up, but we need to post a good score tomorrow.”

The Crusaders will return to the course on Sunday for the final day of competition.  Action begins at 6:30 a.m. CDT.