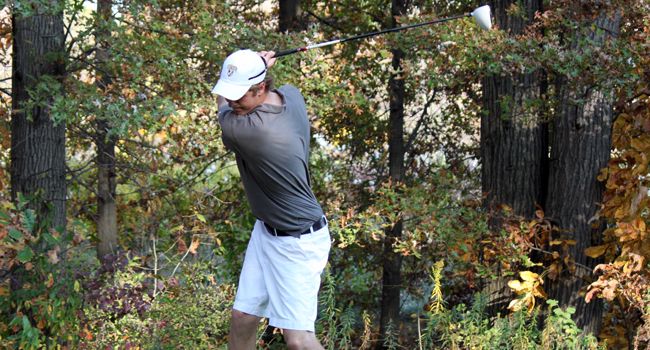 The Valparaiso men's golf team opened the 2012 fall season by posting the best single-round stroke total in program history on Monday, while senior Austin Gaugert (Lake Geneva, Wis./Badger) matched the Crusaders' record for best round in relation to par as the Crusaders ended the day in second place in the Battle at the Tetons in Victor, Idaho, hosted by Weber State University.

“It was a terrific team effort today, with balance in our two rounds of scoring, on a tournament-tough golf course,” said Crusader head coach David Gring. “I'm not surprised with our scores today, since our qualifying rounds for this tournament and practice over the past ten days has been excellent.  On the other hand, I was pleasantly surprised with the guys making good adjustments to their club selection and shot distances, because of the higher altitude - almost 6,000 feet above sea level.”

The Crusaders posted a team score of 284 in the tournament's opening round on Monday morning, breaking by one stroke the previous program record of 285, set last year at the Butler Fall Invitational. In addition, the 284 came on a par-72, 7,373-yard course, meaning that for the first time in program history, Valpo broke par as a team for an entire round, ending the opening round at four under par.

Valpo followed in the second round with a score of 302, giving it an aggregate of 586 through the first two rounds of the 54-hole event, good for second place. Wyoming leads the team standings with a 562 total through two rounds, paced by individual leader Eddie Stewart (68-69 – 137).

For the Crusaders, Gaugert led the way, spurred on by an opening round of 69. The three-under-par round matches the previous program record for a single round in relation to par and is the second time Gaugert has shot a -3 while competing for Valpo. The senior closed his day with a 73 in round two, giving him a total of 142 through two rounds which ties him for third place with one round remaining.

Sophomore Joe Harris (Washington, Iowa/Washington) was the second-best Crusader on the day, ending the day in a tie for 14th (71-77 – 148). Junior Kyle Henning (Brookfield, Wis./East) and fifth-year senior Brad Winters (Elgin, Ill./Saint Edward [Dayton]) finished the day one stroke behind Harris with a 149, good for a tie for 18th. Henning posted rounds of 73 and 76, while Winters went 71-78. Rounding out the Valpo lineup was sophomore Eric Winters (Elgin, Ill./Saint Edward), who finished the 36 holes tied for 29th (76-76 – 152).

"With this being our first two competitive rounds of the year, the guys showed that their hard work over the summer really paid off,” said Gring.

Valparaiso concludes play at the Battle at the Tetons on Tuesday with the final 18-hole round, rounding out the 54-hole, season-opening tournament.