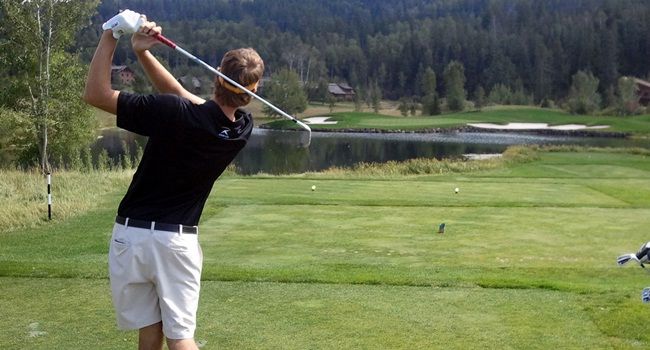 The Crusaders sit in fourth place after day one at Kansas State.
Related Links

The Valparaiso men's golf team kicked off the first of two days of action Monday at the Jim Colbert Intercollegiate, hosted by Kansas State, ending the day in fourth place.

The Crusaders posted a total of 639 through two rounds of the three-round event, just two strokes out of third place. Host Kansas State leads the team standings with a 609, and the Wildcats' Daniel Wood leads the individual standings at 148.

“This was the longest course that we have played all year, close to 7,500 yards,” said Crusader head coach David Gring. “With the 30-35 mph Kansas winds on a wide-open golf course, the guys played hard and with a lot of determination. We are two shots out of third place, and the guys are excited for the final round in a field of nine good teams.”

Senior Austin Gaugert (Lake Geneva, Wis./Badger) and sophomore Joe Harris (Washington, Iowa/Washington) lead the Crusaders through 36 holes, each posting a 157 to sit in a tie for 11th place. Gaugert shot a 77-80 to end the day at 157, while Harris bounced back from an opening 81 to shoot a team-best 76 in the afternoon round.

“Austin Gaugert and Joe Harris had solid rounds, hitting a lot of fairways and greens in regulation,” said Gring.  “They stayed very focused, throughout the entire 36 holes.”

Sophomore Eric Winters (Elgin, Ill./Saint Edward) ended the day in 31st place with a 165 (80-85), while fifth-year senior Brad Winters (Elgin, Ill./Saint Edward [Dayton]) and senior Josh Kalita (Chesterton, Ind./Chesterton) each shot a 166 on Monday [Winters 83-83; Kalita 87-79] to enter the final round tied for 32nd place. Playing as an individual, junior Kyle Henning (Brookfield, Wis./East) rebounded from a rough opening round to shoot a 77 in the afternoon and enters Tuesday tied for 41st place.

Valparaiso concludes the Jim Colbert Intercollegiate on Tuesday with one final round of 18 holes to close out the 54-hole event.