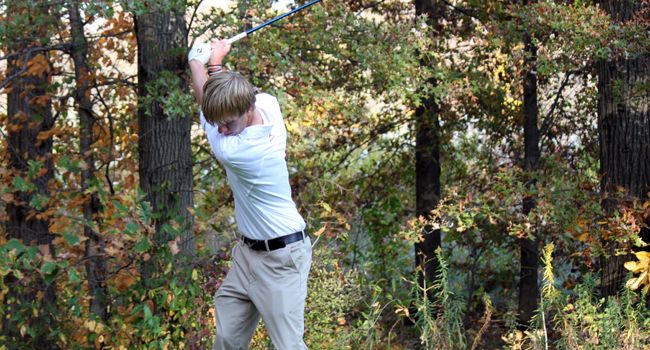 The Valparaiso men's golf program closed out play at the CSU Cougar Classic in Chicago, Ill. on Tuesday. Valpo, which sent two teams to the event, placed third and seventh in the 36-hole event while boasting a pair of top-five individual finishers.

The Crusaders' 'gold' team finished with a round of 309 on Tuesday to close the tournament with a 595, just one stroke out of second position and a new program best for a 36-hole tournament. Meanwhile, the 'brown' squad shot a 311 on Tuesday and finished at 616, just five shots out of the top-five. Green Bay won the team title, posting a total of 590, while Oscar Sharpe from Indian Hills C.C. earned individual medalist honors with a 142 (-2).

“The guys played hard today, and we simply came up short in trying to win the tournament,” said Crusader head coach David Gring.  “We're proud of another top-three finish, and we are looking forward to the Dayton Invitational.”

A pair of Crusaders tied for fourth place after posting scores of 147. Senior Austin Gaugert (Lake Geneva, Wis./Badger) closed with a 76 to go with Monday's 71, while junior Kyle Henning (Brookfield, Wis./East) shot Valpo's best individual round on Tuesday with a 74 to secure his top-five finish. Despite a round of 80 on Tuesday, fifth-year senior Brad Winters (Elgin, Ill./Saint Edward [Dayton]) still finished within the top-ten with a 149 to tie for ninth position.

Sophomore Eric Winters (Elgin, Ill./Saint Edward) closed the tournament with a 79 to finish at 152, tying for 19th place, while sophomore Joe Harris (Washington, Iowa/Washington) rounded out the 'gold' squad with an 81, placing in a tie for 44th at 159. Meanwhile, on the 'brown' team, freshman Matt Ward (Plainfield, Ill./South) led the way with a 151 to tie for 16th position after posting an 80 on Tuesday.

Freshman Michael Holevas (Elgin, Ill./Saint Edward) and junior Thomas Wettstein (Neenah, Wis./Xavier) finished in a tie for 25th place with a score of 154 after shooting respective rounds of 76 and 79 Tuesday. Senior Andy Webb (Bedford, Ind./North Lawrence) registered a round of 76 Tuesday to close at 157 in a tie for 37th, while senior Josh Kalita (Chesterton, Ind./Chesterton) tied for 60th with a 167 after shooting an 82 on Tuesday.

“Between two of our own teams, we had six scores in the 70s today,” said Gring. “With the 25-30 mph winds, the guys managed the course well. This tournament was another confidence boost for our team, and we continue to learn in every tournament that we play.”

Valparaiso closes its 2012 fall schedule next week at the Dayton Invitational. The two-day event is scheduled to start on Monday, Oct. 22.