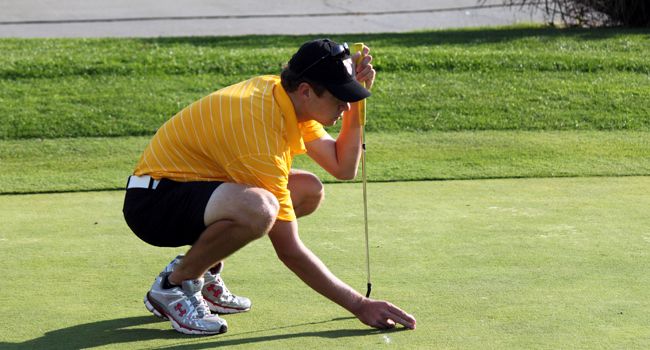 Josh Kalita is in seventh after the first two rounds of the Detroit Titans Invitational.
Related Links

Senior Josh Kalita (Chesterton, Ind./Chesterton) posted a two-round score of 146 on Friday, which is good enough to put him in a tie for seventh place, and the Valparaiso men’s golf team is in fourth place after the first two rounds of the Detroit Titans Invitational at Prestwick Village GC in Highland, Mich.

The Crusaders posted a total of 604 after the first two rounds. Host Detroit leads with a score of 585. A second squad of Valparaiso players is in 11th place.

“With temperatures in the 30’s and a very wet course, the guys concentrated well over the 36-hole day,” Valparaiso head coach David Gring said. “They demonstrated good course management on a solid golf course.”

Kalita opened play with a one-under opening round of 71, and he followed that up with a round of 75 of a two-over par score through two rounds. Three players are tied for the individual lead at three-under par.

Junior Thomas Wettstein (Neenah, Wis./Xavier) posted a two-round score of four-over par 148 to be in a tie for 12th. Wettstein started out with a round of 71 and then posted a 77 in the afternoon round.

Senior Austin Gaugert (Lake Geneva, Wis./Badger) is in a tie for 15th place after rounds of 74 and 75.

“We are looking forward to the final round and finishing strong,” Gring said. “We became more familiar with the golf course throughout the day today.”

The Crusaders close out play with 18 holes at Prestwick Village GC on Saturday morning.