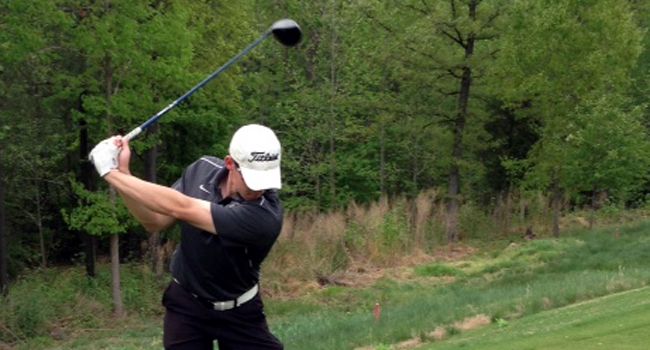 Brad Winters led Valparaiso with a 76 in the opening round of the NCAA Columbus Regional. (David Gring)
Related Links

The Valparaiso men’s golf team posted a team score of 309 in Thursday’s first round of the NCAA Columbus Regional at The Ohio State Golf Club in Columbus, Ohio.

The Crusaders are in 13th place after 18 holes. Charlotte leads after the opening round by one stroke over South Carolina.

“The team got off to a good start, but struggled during the middle of the round with making birdies and saving pars,” Crusader head coach David Gring said. “We played the last six holes better, and we will talk that into tomorrow’s round.”

Fifth-year senior Brad Winters (Elgin, Ill./Saint Edward [Dayton]) led the way for the Crusaders with a 5-over round of 76. He is in a tie for 46th place.

Junior Kyle Henning (Brookfield, Wis./East) is tied for 53rd after an opening round 77.

Senior Andy Webb (Bedford, Ind./North Lawrence) rounded out the Crusader squad with an 81. He is tied for 69th.

“This is a tremendous golf course, and you can’t make mental mistakes or have poor course management,” Gring said. “We did a number of things well today, but we need to play smart and more effectively tomorrow. It’s a three-day, 54-hole tournament, and we have two more good days ahead of us.”

Play continues from the Scarlet Course with the second round on Friday. Live stats will be available through valpoathletics.com.