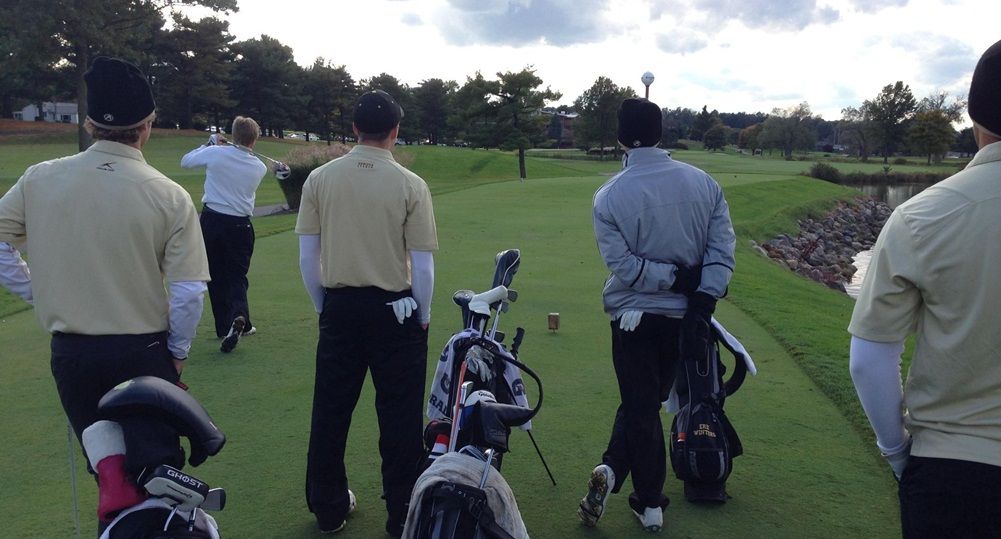 The Crusaders tee off with the Firestone tower in the background.

The Valparaiso men’s golf team kicked off action today in Akron, Ohio at the Firestone Invitational, its first of three tournaments in Ohio during the month of October, completing 36 holes during day one of the two-day tournament.

Consistency has been key for the Brown and Gold during the 2014 fall campaign, and they met those expectations once again as they carded rounds of 296 and 293, good for a 36-hole total of 589 (+13).  The two-round total has the Crusaders in 5th place headed into the final 18-hole round Tuesday morning, just seven strokes out of second place.

“Firestone Country Club is one of the premier golf courses in the Midwest and the guys played the first two rounds of the tournament well, despite a wide variety of weather over 36 holes today,” said Crusader head coach David Gring.  “We had nine holes during the second round that were a real test of focus and patience, with wind and rain covering the golf course for a couple hours.  The guys persevered well through that stretch of weather, and that allowed us to make up some ground on the field during the second round.”

Eric Winters (Elgin, Ill./Saint Edward) paced the team as he is in sole possession of 6th place, after turning in rounds of 73 and 71, good for a total of 144, which puts him at even par. Joe Harris (Washington, Iowa/Washington) followed in his teammate's footsteps as he put together rounds of 73 and 74, giving him a two round total of 147, good enough for 20th position.

“Eric has been so steady for our team this entire fall season,” said Gring.  “He continues to manage the golf course well and his short game has been terrific.  Over the 36 holes today, he played the par-4's in even par and the par-5's in three under par.”

Zach Cutler (O’Fallon, Mo./Timberland) and Jared Magoline (Fond du Lac, Wis./Fond du Lac [Marquette]) almost mirrored each other's rounds as they both finished the day with a 36-hole total of 150, tied for 40th place.  Nick Seitz (Xenia, Ohio/Carroll) rounded out the Crusader team effort on Monday as he closed action with a score of 156.

The Crusaders have certainly been one for strong finishes this fall, and tomorrow should be no exception as they take to the links for the final round of the Firestone Invitational, within striking distance of the victory. Live stats can be found on valpoathletics.com as well as a full recap of the entire tournament tomorrow evening.

“We are going to need to get out to a quick start tomorrow, with some good scoring opportunities on the front nine,” said Gring.  “The ball striking was pretty solid throughout today's rounds, and we will look forward to getting some more critical putts to drop.”