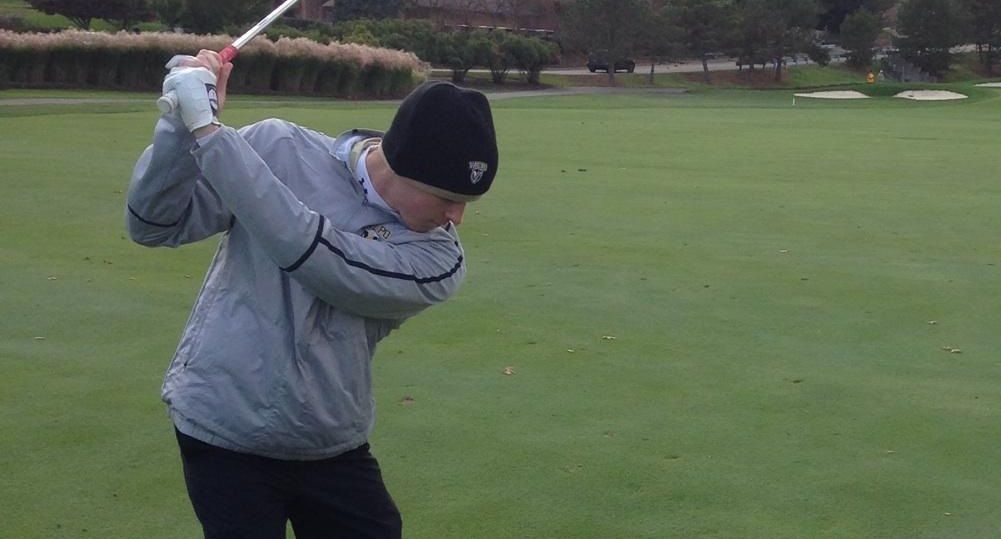 The Valparaiso men’s golf team wrapped up its first tournament of the month today at the Firestone Invitational in Akron, Ohio, having to put up with some less than favorable playing conditions. Wind gusts of up to 20 miles per hour proved to be challenging, but the Brown and Gold were still able to finish in tenth place out of 17 teams.

The Crusaders shot a 305 as a team in the final round and closed the tournament at +30 overall.. USC Aiken took the top spot with a +12.

Pacing the Crusaders once again as he did during each of the rounds was Eric Winters (Elign, Ill./Saint Edward), who turned in a very impressive 7th place finish with a 73 in the final round and a tournament total of 217. The rest of the lineup was once again consistent, all turning in efforts that allowed the team to finish in the top ten.

“Eric continues to play at a very consistent level for us this fall, and I couldn't be more happy for him, with yet another quality performance,” said Crusader head coach David Gring.  “As one of our team captains this year, he is demonstrating great leadership for us.”

Joe Harris (Washington, Iowa/Washington) and Nick Seitz (Xenia, Ohio/Carroll) finished very close to each other in the final standings with total scores of 226 and 227 respectively. Seitz led the Crusaders in scoring on day three, shooting ten shots better than round two with a 71.

Not far behind was Jared Magoline (Fond du Lac, Wis./Fond du Lac [Marquette]) with a three-round total of 232.  Rounding out the Valpo team was freshman Zach Cutler (O’Fallon, Mo./Timberland) with a 236.

“One of the strengths of our team this fall has been finishing our rounds strong, and we struggled closing our round today, playing the last two holes +7 over par,” said Gring.  “While our front nine score of +5 over par was a little higher than we had hoped, it was a lot better than our back nine score of +12.  The team put a lot of good effort in to this tournament, from the practice round through today's round.  We certainly have some positives that we can take from this quality tournament.  We wish we could have closed better, but it is a learning experience, and we will build off of it for the remainder of our season.”

The Crusaders have now finished in the top ten in each of the four tournaments that they have played in during the 2014 fall campaign. They look to continue that success when they resume play in two weeks during the Dayton Flyer Invitational in Kettering, Ohio, October 20th through the 21st. Results and recap of each of the days events can be found at ValpoAthletics.com.