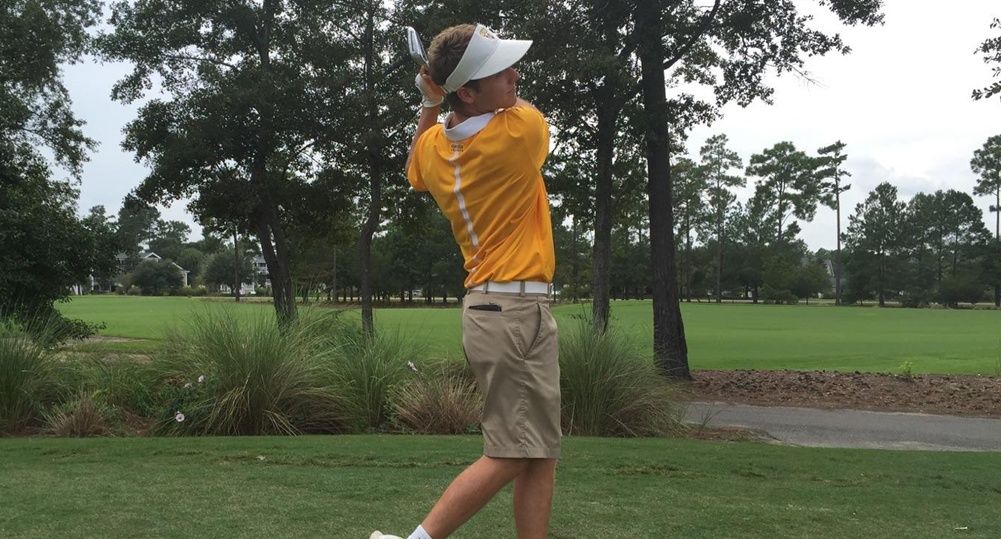 The Valparaiso Crusader men’s golf team kicked off Labor Day weekend in South Carolina at the Golfweek Program Challenge from True Blue G.C., where the Crusaders finished round one shooting a 294 (+6), placing them in 15th place with two rounds remaining.

“Today was a pretty baseline type of day, with a lot of pars, a decent amount of birdies and scores right around par,” said Crusader head coach David Gring. “We couldn't get any real momentum going today, despite hitting a good amount of fairways and greens. Our iron approach shots need to be closer to the pin and then we can convert more birdies.”

Junior Nick Seitz (Xenia, Ohio/Carroll) and redshirt senior Jared Magoline (Fond du Lac, Wis./Fond du Lac [Marquette]) led the Crusaders, as both shot a 73 (+1) on the par-72, 6,920-yard course. Seitz went one under par on the front nine, while Magoline shot even par during the same stretch.

Michael Doherty (Lisle, Ill./Naperville North) led Valparaiso on Sunday, sinking five birdies, including back-to-back birdies on holes 10 and 11. Doherty finished the round with a 74 (+2). Peter Webb (Madison, Wis./James Madison Memorial) also shot a 74 (+2) on the day, and freshman Mitchell Wittmann (Kaukauna, Wis./Kaukauna) rounded out the club’s total with a 77 (+5).

Valparaiso finds itself 22 shots off the lead held by Jacksonville, which shot a combined 272 (-16) on Sunday. The Crusaders are only 14 shots behind second-place team James Madison (-8).

“We had a good practice session after today's round and we were able to tighten some areas up,” said Gring. “The tournament covers three days and we have two good days ahead of us. To take a quote from assistant coach Josh Kalita, 'The team isn't going to break par if no one is shooting under par.' We have plenty of good scoring in the tank and we will look forward to tomorrow's round.”

Round two of the three-round event will be held tomorrow from South Carolina. Live scoring will be available via ValpoAthletics.com.