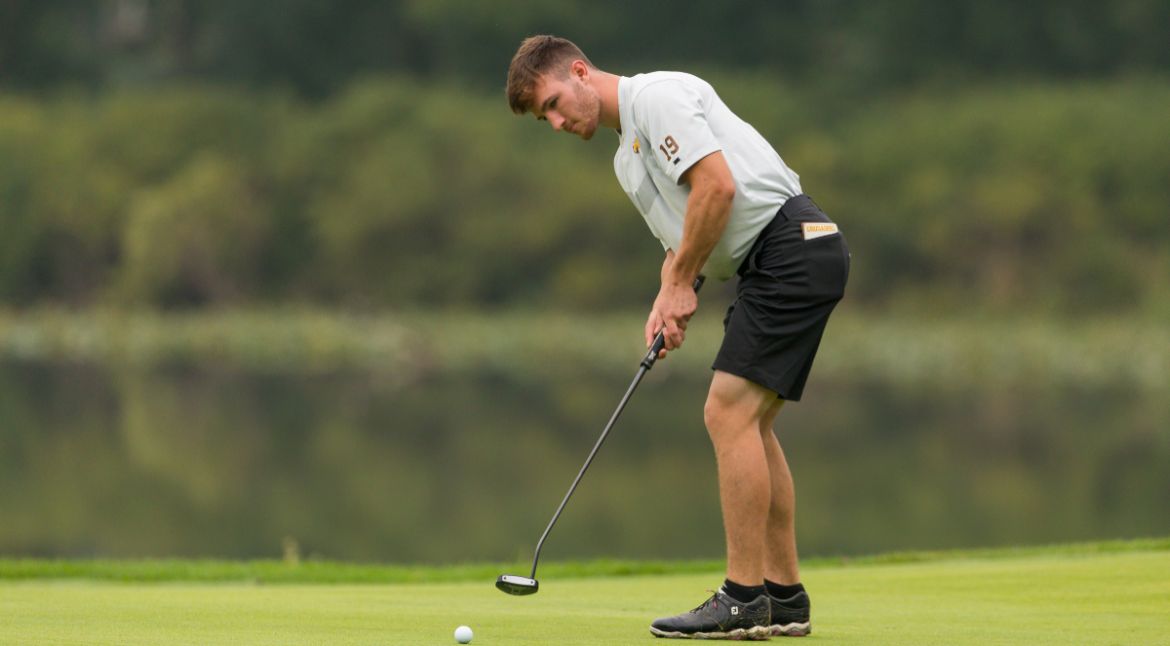 Charlie Toman is second of 89 entering Tuesday's final round of the Crusader Collegiate.

The Valparaiso University men’s golf team utilized a glowing front nine in Monday’s afternoon round to erase an early deficit and climb into second place in a 15-team field through 36 holes at the Crusader Collegiate. Valpo went three under as a team for the day in the fourth annual event hosted at Sand Creek Country Club in Chesterton.

“We didn’t start the tournament well, struggling with the third and eighth holes and missing some short putts. The guys seemed to be pretty excited to play on our home course and the nerves might have been dialed a little higher at the start of the round. Caleb and Garrett had a terrific start for us and Drew and Jack had a better rhythm with some quality pars and birdies on the back nine. Charlie played steady for us the entire round.”

“We had 15 birdies in the first round and we started the second round really hot, with 13 birdies on the front nine. The proximity of our shots to the hole was excellent and the guys were rolling the birdie putts very well. The momentum really shifted for us in the second round and we worked our way back to leading the tournament after 27 holes. We added 11 birdies on the back nine, but we didn't play the 16th hole very well and couldn't quite capitalize on a couple of the Par 5s down the stretch. There is a lot of golf played on the 36-hole Monday rounds. For the guys to play their best and with great determination when the day got long was very impressive to our coaching staff.”

“It was fun to watch the entire team play today. It was especially fun to watch Garrett make 12 birdies and Charlie roll in 10. The two of them really hit a lot of good shots into the greens and made some terrific putts. To birdie five holes in a nine-hole stretch is something special.”

“Tomorrow we need to take advantage of the Par 5s much better than today. We left a lot of scoring opportunities out there on the Par 5s and we can make up some ground on those four holes. We need to continue playing smart and without consequences, focusing on our game plan and good course management. The golf course will be set-up more difficult tomorrow, but we are familiar with our home course and that will give us a competitive edge.”

The final round of the Crusader Collegiate will begin with tee times off the first and 10th holes starting at 7:30 a.m. CT on Tuesday at Sand Creek. Live scoring will be available via BirdieFire.