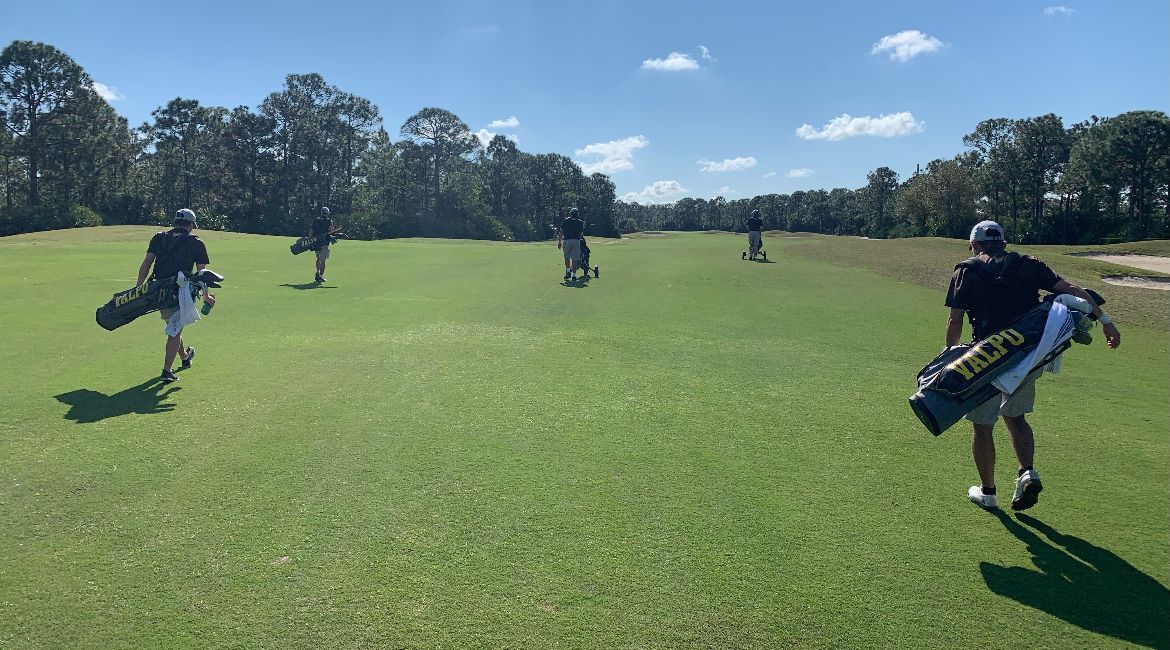 The spring season is underway for the Valparaiso University men’s golf team, which hopes to build on a successful fall in the coming months leading into the annual conference championship. That quest is off to a solid start as Valpo is just three strokes out of the top spot in a tightly-packed field through one round at the season-opening Advance Golf Partners Collegiate, hosted by UNCG at the par-72, 7169-yard Hammock Green Golf Club in Palm City, Fla.

“I was pleased with the performance of the entire team for today’s first round, especially with us not competing or playing on grass for the past four months. We still had some rust that we needed to kick off today, and I am confident that club selection and shot execution will be a little sharper tomorrow and Tuesday.”

“We were a little anxious to get the spring season rolling, so we had a slow start. By the end of the front nine, the guys had settled in well and made 11 birdies. Our birdie production wasn’t as good on the back nine, but we still managed eight more birdies. We really struggled with our par-5 scoring throughout the day with some poor club choices and shot execution. That’s really the difference of where we stand as a team after the first round and we will make some better decisions tomorrow.”

“Caleb and Yianni had five birdies each, while Garrett made four birdies on the front nine alone. We really had a lot of good opportunities for birdies and the guys putted well overall. We basically played the entire front nine in the rain and the guys managed that really well. We are looking forward to the next two rounds and enjoying this Florida weather.”

The opening tournament of the spring season will continue on Monday, Feb. 14 as the Advance Golf Partners Collegiate continues with Round 2 at Hammock Creek GC in Palm City, Fla. Live scoring is available via GolfStat.