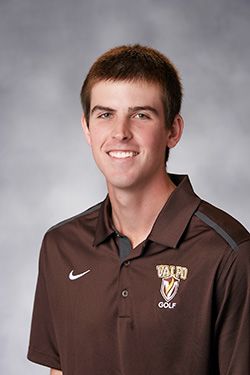 2013-14: Appeared in seven events during his junior season … has averaged a 77.81 in three seasons and enters senior year with the sixth-best career average in program history … carded a pair of 71s, his career-low round, at the John Piper Intercollegiate, finishing in a tie for 11th (218) … score of +2 in relation to par at John Piper Intercollegiate is tied for the tenth-best 54-hole tournament in relation to par in Valpo history … finished tied for 20th at the Dayton Flyer Invitational (146), shooting the second-lowest 36-hole score in program history … named to the Horizon League Academic Honor Roll.

Prep: A four-year letterwinner for the Greenwave ... won Suburban Christian Conference title and was conference Most Valuable Player as a senior ... led team to a regional title and a third place finish as a team at the state championships as a senior ... won regional title individually as a junior ... finished sixth at the Illinois State Championships as a junior ... earned First Team All-SCC honors as a sophomore after being named to the Second Team as a freshman ... set school record for nine holes at -3 as a senior ... a four-time Academic All-SCC selection ... a member of National Honor Society ... also lettered in volleyball and bowling.

Personal: Eric is the son of Greg and Julia Winters ... major is finance ... has been named to the Dean's List and earned Presidential academic honors during his time at Valpo ... born Aug. 7, 1992.