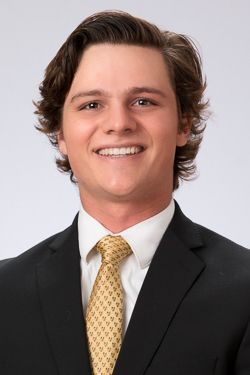 2017-18: Had a strong rookie campaign, finishing in a three-way tie for the team lead in season scoring average at 76.33… Led the team at the Titans Motown Collegiate on Oct. 16-17, finishing with a 222 (+6) to tie for fifth overall… Also topped the Crusaders on Feb. 17-18 at The Invitational at Savannah Harbor, where his three-round score of 221 (+5) was tied for 25th of 83…Carded an even par of 71 in the second round of the Bash at the Beach on March 6, his best 18-hole score of the season… Paced his team for the third consecutive tournament at the Bash at the Beach, finishing at 221 (+8), tied for 21st of 60… Competed in Valpo’s first MVC Championship.

Prep: Four-year varsity letter winner, four-time NAC All-Conference honoree and two-time individual conference champion... Took the league title in both his junior and senior seasons...Owned a 3.87 cumulative high school grade point average, was a four-time Northeastern Athletic Conference All-Academic honoree and a Dunham Scholar... Reached state as a freshman, sophomore and senior and helped his team finish as the Class 1A state runner-up during his senior season... Racked up victories in IJGA, MAJGT and U.S. Kids Tours along with high school tournaments during his junior career.

Personal: Son of Jim and Sherri Seward... Father Jim is a Valpo graduate... Has two younger siblings, Kyle and Elise... Also a drummer... Majoring in finance and business analytics... Born on Feb. 16, 1999.