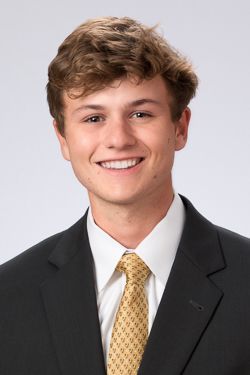 Prep (Athletic): Part of a successful Center Grove program, leading the team to three sectional titles, three regional crowns, the 2017 state championship and state runner-up finishes in 2018 and 2019… Three-time varsity letter winner and two-time all-county honoree… Named the 2019 Johnson County Player of the Year… Has twice earned all-conference accolades and was the 2019 individual sectional champion (-2, 70) and the 2019 individual regional champion (-3, 69), making him the only player in the state to win both sectionals and regionals… Went on to finish at t-6 at the 2019 Indiana High School State Finals and was awarded 2019 all-state… Other individual honors include 2017 Center Grove High School Golf Freshman of the Year, 2018 Center Grove Mental Attitude Award Winner and 2019 Center Grove Golf MVP... Took medalist honors at the Indiana Boys Team State Finals at Ackerman-Allen Course in West Lafayette on June 10-11 by carding a two-round score of 146 (+2), including a 72 (E) in Round 2. He helped his "Center Grove Legacy" team capture the team title in a two-round score of 618, winning the 10-team event that featured the state's top talent.