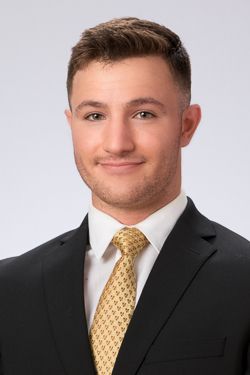 2019-20: Finished third on the team with a season scoring average of 74.92 in 12 rounds spanning four tournaments… Enters his junior season with the best career scoring average in modern program history (minimum 20 rounds and two seasons) at 74.20… Had his best round of the season on Sept. 16 in Round 2 of the Crusader Collegiate, carding a 69 (-3), one of four rounds of par or better that he put together in 2019-20… Completed the Crusader Collegiate with a 211 (-5), part of a three-way tie for runner-up honors. That mark tied for the fifth-best 54-hole tournament score in program history in overall score and fourth-best in relation to par… Finished second on the team and t-17th/99 overall at the Invitation at Savannah Harbor, contributing to Valpo’s team championship with a 220 (+4, 75-73-72).

2018-19: Led the team with a 73.94 scoring average over 33 rounds as a freshman as he burst on to the scene with the fourth-best single-season scoring in program history… Was named the MVC Golfer of the Week following his first collegiate tournament on Sept. 3-4 when he led his team with a 54-hole score of 223 (+7) at the Turning Stone Tiger Intercollegiate. He notched his first collegiate eagle in the first round of his Valpo career… Enjoyed his best round of the season on Sept. 9, carding a 69 (-3) in the opening round of the Golfweek Program Challenge… Enjoyed his first career Top 10 finish at The Invitational at Savannah Harbor (Feb. 16-17) with a 217 (+1), tying for ninth in a 95-player field. That showing allowed him to start the spring season the same way he began the fall – with an MVC Golfer of the Week Award… Enjoyed another Top 10 finish at the Butler Spring Invitational, carding a 36-hole score of 142 (+2) to place eighth of 57. That performance ranked tied for third in program history for 36-hole tournament overall score and tied for seventh all-time in 36-hole tournament score in relation to par… Finished the year by placing 20th with a 54-hole score of 228 at the MVC Championship April 22-23.